Details
Published on Sunday, 17 July 2022 10:41
Written by The Ridgefield Playhouse 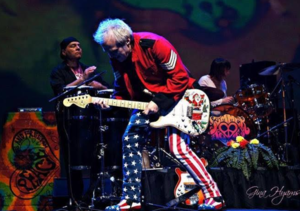 Glen Burtnik’s Summer of Love Concert isn’t just a concert, it’s a Rock Festival on stage, celebrating the Classic Rock & Soul of the 60’s and 70’s, the Music of the Woodstock Generation!

You’ll hear your favorites from artists like The Beatles, The Beach Boys, Crosby, Stills & Nash, The Rolling Stones, Bob Dylan, Janis Joplin, Jefferson Airplane, Jimi Hendrix, and many more!  The Summer of Love Concert makes its only Connecticut tour stop at The Ridgefield Playhouse on Sunday, July 31at 4pm.

The show, part of the Pepsi Rock Series Driven by North American Motor Car, features a cast of up to 18 performers, including a full horn section, multiple background vocalists and featured singers, along with a psychedelic light show! The Summer of Love Concert was created by Gary Burtnik, an alumnus of STYX and the Original Cast of Beatlemania – he played Paul! Burtnik and his band will perform the iconic songs that defined a generation and changed the world along the way.

Make it a great night out with dinner and a show - visit Tequila Escape Kitchen & Bar (439 Main Street, Ridgefield) before the event for dinner and receive 10% off your check when you present your ticket!  Media sponsor for this one-night-only event is WEBE 108fm.

For more information or to purchase touchless print at home tickets ($49.50) go online at www.ridgefieldplayhouse.org or, you can visit or call the box office (203) 438-5795. The Ridgefield Playhouse is a non-profit performing arts center located at 80 East Ridge, parallel to Main Street, Ridgefield, CT and is committed to keeping the arts alive and available to all.