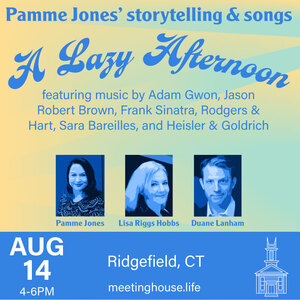 On August 14th at 4 pm The Meetinghouse in the Ridgebury section of Ridgefield, 605 Ridgebury Road will host an afternoon of songs curated from American standards, musical theater, and popular culture.

Enjoy Pamme Jones’ (Executive Director of the Ridgefield Theater Barn) whose signature brand of storytelling and songs will feature music by Adam Gwon, Jason Robert Brown, Frank Sinatra and Rodgers & Hart, among others.

Pamme has been performing since the age of five and can be seen regularly on the RTB stage performing Improv and as co-host of the popular Piano Bar series.

She will be joined by special guest Duane Lanham, a favorite of the patrons of RTB and a celebrated actor, singer and director whose credits include national and international tours.  Lisa Riggs Hobbs is at the helm of “A Lazy Afternoon” for musical direction and accompaniment.

Tickets: may be purchased for $25 on The Meetinghouse website here