Details
Published on Thursday, 18 August 2022 16:44
Written by The Ridgefield Playhouse 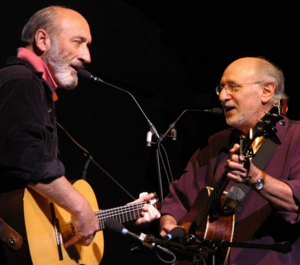 It’s hard to imagine that it was sixty years ago when the iconic trio Peter, Paul & Mary took over the American folk song landscape, paving the way for artists like Bob Dylan and John Denver.

Since Mary Travers passing in 2009, Peter and Paul have not slowed down. Still performing together all over the country at 84 years young, the duo will be returning to The Ridgefield Playhouse on September 16, 2022, at 8pm as part of the 068 Magazine Singer Songwriter Series.

Their music, with hits such as “500 Miles,” “If I Had A Hammer,” “Where Have All The Flowers Gone,” “Leaving On A Jet Plane,” and “Puff The Magic Dragon” became part of a social, cultural, and political movement that brought messages of hope, humanity, and activism to each crowd they serenaded – many of which were on college campuses!  Their lyrics gave voice to the struggle for civil rights, the women’s movement and efforts to end the war in Vietnam.   Peter Yarrow, Mary Travers, and Noel “Paul” Stookey went on to win five Grammy Awards and had eight Gold and five Platinum albums in their short time together before separating in the 1970s to pursue individual careers. Be sure not to miss this amazing opportunity to see two of the original members of this iconic American folk group perform live at The Ridgefield Playhouse this September.  Media sponsor for the event is WSHU Public Radio.

For more information or to purchase touchless print at home tickets ($60-$70) online at www.ridgefieldplayhouse.org or, you can visit or call the box office for VIP Party Pass at (203) 438-5795. The Ridgefield Playhouse is a non-profit performing arts center located at 80 East Ridge, parallel to Main Street, Ridgefield, CT and is committed to keeping the arts alive and available to all.