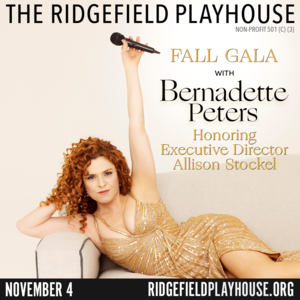 Winner of three Tony Awards, a Golden Globe, three Emmy and four Grammy Award nominations and a star on the Hollywood Walk of Fame, Bernadette Peters is best known for her work on stage and as one of Broadway’s most critically acclaimed performers. Bernadette recently starred on Broadway as Dolly Gallagher Levi in the hit musical, Hello, Dolly!. Prior to that, she starred in City Center’s Encores! Production, A Bed and a Chair: A New York Love Affair featuring the music of Stephen Sondheim and orchestrations by Wynton Marsalis and on Broadway, in Stephen Sondheim’s A Little Night Music and Follies.

Get red carpet ready for this special evening to celebrate the 21-year career of Executive Director, Allison Stockel, and honor her dedication, commitment and years of service, with special guests! Gala tickets include sit-down dinner, open bar, silent auction and more!