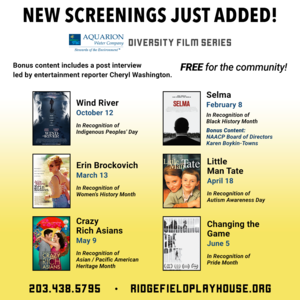 The Ridgefield Playhouse has announced the next five films in the Aquarion Water Company FREE Diversity Film Series for 2023. Each screening will include unique bonus content consisting of an interview led by entertainment reporter Cheryl Washington and can be seen following the screening in the theater or on The Ridgefield Playhouse YouTube channel. Thanks to the generosity of sponsor, Aquarion Water Company, these events are FREE to the community. The Ridgefield Playhouse is proud to present this Diversity Film Series and hope that these films will serve as a starting point for people to begin a conversation with one another, and encourage audience members to work toward mutual understanding.  Together we hope that we can all become better allies.

Aquarion Water Company Diversity Film Series for 2023 will include-

Selma on Wed, February 8 at 7:30pm in recognition of Black History Month.

The bonus content for Selma will consist of an interview with Karen Boykin-Towns, Vice Chairman of the National Association for the Advancement of Colored People (NAACP) Board of Directors.

For more info and to register for FREE tickets: https://bit.ly/SelmaRPH

Erin Brockovich on Mon, March 13 at 7:30pm in recognition of Women's History Month.

In this 2000 biographical drama film, Julia Roberts (Steel Magnolias, Pretty Woman, Eat Pray Love) takes on the role of Erin Brockovich, who fought against the energy corporation Pacific Gas and Electric regarding its role in the Hinkley groundwater contamination incident. The film, based on the true story, was nominated for five categories at the 73rd Academy Awards, with Roberts taking home Best Actress.

For more info and to register for FREE tickets: https://bit.ly/ErinBrockovichRPH

Originally released in 1991, Little Man Tate is Jodie Foster’s directorial debut starring Adam Hann-Byrd as Fred Tate, a seven-year old child prodigy who struggles in social settings and is largely implied to have Autism. The story touches upon growth pains, the pressures of being a gifted child, and the difficulties faced in finding familiarity in your peers when you are considered different.
For more info and to register for FREE tickets: https://bit.ly/LittleManTateRPH

Based on the best-selling novel series by Kevin Kwan, Crazy Rich Asians tells the story of Rachel Chu (portrayed by Constance Wu in her breakout role) an American-born Chinese professor who travels to meet her boyfriend’s (Henry Golding: Snake Eyes, Last Christmas) family and is surprised to discover they are among the richest in Singapore. With a star-studded cast, the comedy drama touches on themes of privilege, family structure, respect for tradition and culture, and staying true to oneself.

For more info and to register for FREE tickets: https://bit.ly/CrazyRichAsiansRPH

Changing the Game on Mon, June 5 at 7:30pm in recognition of LGBTQ+ Pride Month.

Changing the Game tells the stories of transgender high school athletes from across the country as they compete at the top of their fields, while challenging the boundaries and perceptions of transgender lives. Directed by Michael Barnett, the documentary was the Official Selection at the Tribeca Film Festival, won the Audience Award at Outfits Los Angeles, and was selected Best Documentary at Frameline 43, San Francisco’s International LGBTQ+ Film Festival.

For more info and to register for FREE tickets: https://bit.ly/ChangingTheGameRPH

For more info and to register for FREE tickets: https://bit.ly/SelenaRPH

NEXT UP is Wind River on Wed, October 12 at 7:30p, in recognition of Indigenous Peoples' Day. Wind River is a 2017 neo-Western murder mystery film starring Jeremy Renner and Elizabeth Olsen as a U.S. Fish and Wildlife Service tracker and an FBI agent trying to solve a murder on the Wind River Indian Reservation in Wyoming. The film’s writer/director Taylor Sheridan has said that he wrote the film to raise awareness of the issue of the high number of Indigenous women who are raped and murdered, both on and off reservation.

The bonus content for WIND RIVER will consist of an interview with Deborah Maytubee Shipman, Founder and Executive Director of Missing and Murdered Indigenous Women USA, led by entertainment reporter Cheryl Washington.

For more info and to register for FREE tickets: https://bit.ly/WindRiverRPH

These films are all also part of the Cohen and Wolf P.C. Movie Series.