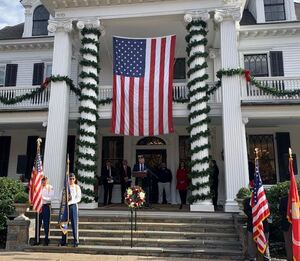 Veterans Day, Friday, November 11th at 11 a.m., the American Legion Post 78 will conduct the ceremony to honor Ridgefield’s and all of America’s 21,700,000 veterans.

The ceremony will be conducted in front of the Lounsbury House/Veterans Memorial Garden, beginning at 11 a.m.

The featured speaker is Ridgefield’s native son George Schuster, a graduate of Ridgefield High School and the University of Connecticut. During the Vietnam War he was drafted and went to the U.S. Navy Officer Candidate School in Newport, R.I. Completing his training Ensign Schuster was then assigned to a tanker the USS Kankakee.

After being promoted to Lt. JG he was assigned to the Mobile River Assault Force, known as the “Brown Water Navy” in Vietnam. After completing his tour of duty, the then Lt. George Schuster returned to Ridgefield worked in the investment industry and raised two children with his wife Silvia.

The ceremony will include patriotic songs sung by Ridgefield’s High School choir member Graham Kitchin with readings by Veterans and local officials.

Cub Scout Pack 74 will assist in the ceremony by the laying of the wreath on the memorial monument followed by Military Honors and playing of taps performed by Shane Miller of Ridgefield High School.

All are invited to attend this ceremony as a tribute to our veterans for their service.