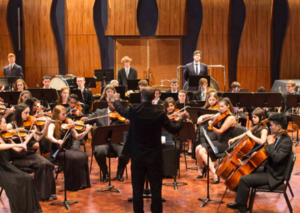 The Western Connecticut Youth Orchestra will launch its 21st season with a Fall Concert in the Anne S. Richardson Auditorium at Ridgefield High School this Sunday, November 20, 2022, at 4:00PM.

The concert will feature the WCYO Wind Ensemble, String Orchestra, and Symphony Orchestra and include a diverse repertoire of classical and contemporary concert music.

The Wind Ensemble will begin the program with a performance of the Harry Edison and Jon Hendricks jazz classic Centerpiece. Next up will be Flourish for Wind Band, described by conductor Malin Carta as prominent piece in the repertoire of Wind Ensembles “for its balanced and careful blending as all the instruments are weaving in and out of the melody.” The set will conclude with a delightful arrangement of music from the musical “Fiddler on the Roof.”

The String Orchestra, conducted by Joanna Giordano, will kick off the season with some lively selections that will certainly be familiar to our audience members beginning with a string version of “Old Time Rock and Roll” that includes a “guitar solo” performed by the cello section. Next up, from the 1965 Beatles album, Rubber Soul, an arrangement of Norwegian Wood with its smooth flowing melody by John Lennon and Paul McCartney. The final piece, Synergy, by Deborah Baker Monday, embodies the “feeling of synergy as the individual musicians of the orchestra must work together as a whole to produce a great performance,” explains Ms. Giordano.

In the final performance of the afternoon, the WCYO Symphony Orchestra, under the leadership of Music Director and conductor Eric Mahl, will present Beethoven’s Leonore Overture No. 3, a much loved and essential piece in traditional symphonic repertoire based on the complex plot of Leonore and her wrongly imprisoned love, Forestan. From its thrilling conclusion the string musicians will present Samuel Barber’s moving “Adagio for Strings” , written in 1936 when Barber was only 26 years old. The closing performance will include the entire orchestra as they present Johannes Brahms’ Variation on a Theme by Haydn. Mr. Mahl relates the short vignettes of music in this piece to “walking through a room in a museum, stopping briefly at each painting evoking a different character.”

WCYO invites you to join them for an entertaining afternoon of music. Tickets are $20 for adults and $10 for students/seniors and may be purchased at the event or on-line through Saturday at noon on the WCYO website with this link.

Western Connecticut Youth Orchestra is non-profit youth orchestra program based in Ridgefield, CT and provides advanced music performance opportunities to youth musicians from more than 20 towns in the surrounding Connecticut and New York communities. To learn more about the WCYO or to schedule an audition, please visit wctyo.org or call 203-894-8786.