New Shows On Sale Now At The Ridgefield Playhouse

Details
Published on Wednesday, 23 November 2022 10:15
Written by The Ridgefield Playhouse 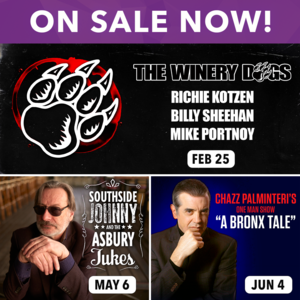 Tickets are on sale now for the 3 new shows announced earlier this week at The Ridgefield Playhouse!

The power rock supergroup returns after a sold out show in 2019! The band is comprised of vocalist and guitarist Richie Kotzen, who made his mark with Poison and Mr. Big; bassist Billy Sheehan, who has been rocking for decades with Steve Vai, David Lee Roth, Mr. Big and others; and drummer Mike Portnoy, the co-founder of progressive metal superstars Dream Theater. Together, their sound transcends any of the styles they’re best known for – especially in their high-octane live shows. Their hard rock hits include “Elevate,” “Oblivion” and “I’m No Angel.” Part of the Pepsi Rock Series Driven by North American Motor Car.

For tickets and more info: https://bit.ly/TheWineryDogsRPH

Southside Johnny and the Asbury Jukes on Sat, May 6 at 8pm

The Godfather of the New Jersey Sound returns to the Playhouse stage for a record 13th performance! The raucous, roots-tinged rock and blues band has flourished with more than thirty albums, releasing twelve studio albums since 1976. With thousands of live performances around the globe, a legion of famously-dedicated and enthusiastic fans, and a vibrant legacy of classic songs - including “Havin’ a Party,” “I Don’t Want to Go Home” and “Love on the Wrong Side of Town” - that have become "hits" to their worldwide fan base. Part of the Pepsi Rock Series Driven by North American Motor Car.

For tickets and more info: https://bit.ly/SouthsideJohnnyRPH

Back by overwhelming demand, Academy Award nominee Chazz Palminteri returns to The Ridgefield Playhouse stage with "A Bronx Tale” in his only Connecticut performance! This is the show that started it all! Before it became a hit Broadway show, Chazz Palminteri performed the one-man show of the book and film, A Bronx Tale -- about his true-life story of growing up in the Bronx -- right here on the stage of The Ridgefield Playhouse! Now, after winning multiple awards and performing the show more than 900 times on stages around the world, Chazz Palminteri is back with the original one-man show that sold out! Part of the Teed & Brown Broadway & Cabaret Series.

For tickets and more info: https://bit.ly/ChazzPalminteri23RPH

Make sure to bid on the 2022 Black Friday Auction for one of a kind gifts!

Bid on 10 items from our collection for a Black Friday Week special auction. Bring home one of these unique pieces to a loved one this holiday season! Auction closes on Sunday, November 27 at 10pm!

Proceeds will benefit the Leir Foundation Arts for Everyone Outreach Program at The Ridgefield Playhouse.

Don’t forget about this week’s fantastic line up-