Details
Published on Monday, 28 November 2022 13:15
Written by The Ridgefield Playhouse 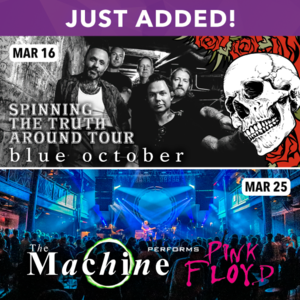 Today at the The Ridgefield Playhouse- new shows are announced, Cyber Monday deals are happening, and great performances taking place all week!

Formed in Houston in 1995 by brothers Justin and Jeremy Furstenfeld, Blue October is an alternative, post-grunge rock group best known for their hits "Hate Me" and "Into the Ocean". Over the course of their 27-year career, they have achieved seventeen Top 40 Singles on the alternative rock chart. The group is widely celebrated for lead singer Justin Furstenfeld's raw, honest lyricism, detailing personal challenges and struggles he has overcome. Their forthcoming project, Spinning the Truth Around, is a triple album, with part 1 out now and part 2 slated release in March 2023. Part of the Pepsi Rock Series Driven by North American Motor Car.

For tickets and more info: https://bit.ly/BlueOctoberRPH

TICKETS ON SALE TO THE PUBLIC FRIDAY, DECEMBER 2 @ 10AM!

The Machine returns after EIGHT past sold-out shows! Hear all of Pink Floyd’s greatest hits as well as obscure gems flawlessly recreated live on stage! Expanded theatrical elements and elaborate stage displays and lighting continues The Floyd spirit of the 1980's. Part of the Pepsi Rock Series Driven by North American Motor Car.

For tickets and more info: https://bit.ly/TheMachineRPH

TICKETS ON SALE TO THE PUBLIC FRIDAY, DECEMBER 2 @ 10AM!

Give the gift of live entertainment this holiday season! Use discount code: SLEIGHTHEHOLIDAYS at checkout and enjoy discounted tickets on select shows-

For tickets and more info: https://bit.ly/2022InsideF1RPH

Don’t miss out this week’s fantastic line up-