Details
Published on Tuesday, 17 January 2023 14:49
Written by The Ridgefield Playhouse 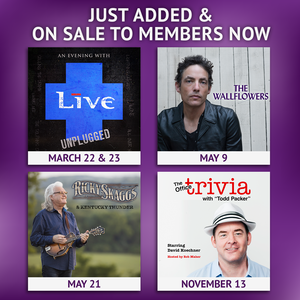 2023 is off to an exciting start at The Ridgefield Playhouse, who just announced some more exciting shows coming to their stage.

With more than 20 million albums sold, +LIVE+ takes the stage of the Ridgefield Playhouse with a 2-night stand and their only CT performances! Don't miss Ridgefield local, Ed Kowalczyk when he makes his Playhouse debut as +LIVE+, having previously performed solo to a sold out house in 2015. The +LIVE+ set list will be comprised of their massive hits and fan favorites—songs that have defined the alternative rock era, like “Lightening Crashes,” “I Alone” and so much more. Part of the Pepsi Rock Series Driven by North American Motor Car.

For tickets and more info: https://bit.ly/LIVEUnpluggedRPH

The Wallflowers on Tues, May 9 at 8pm

For the past 30 years, the Jakob Dylan-led act has stood as one of rock’s most dynamic and purposeful bands – a unit dedicated to and continually honing a sound that meshes timeless songwriting and storytelling with a hard-hitting and decidedly modern musical attack. Part of the Pepsi Rock Series Driven by North American Motor Car.

For tickets and more info: https://bit.ly/TheWallflowersRPH

Ricky Skaggs & Kentucky Thunder on Sun, May 21 at 8pm

15-time Grammy Award Winner, Ricky Skaggs' career is easily among the most significant in recent country music history. At age six, Skaggs picked up the mandolin and within a few years he emerged as a prominent name in the country scene. Part of the Mountain Dew Country & Bluegrass Series.

For tickets and more info: https://bit.ly/RickySkaggsRPH

Calling all fans of The Office! Test your knowledge of The Office with the Pack-man himself, David Koechner. Teams will compete for prizes - while also hearing behind-the-scenes stories from David about playing the hit show's favorite obnoxious paper salesman (and Michael's BFF), Todd Packer. Part of the Barts Tree Service Comedy Series and Hearst Media Entertaining Conversation Series.

For tickets and more info: https://bit.ly/TheOfficeTriviaRPH

DON’T FORGET TO CHECK OUT THE JANUARY GUITAR AUCTION!

Own a piece of Rock history! For January, we're offering an Epiphone Les Paul Special signed by alternative rock band, Toad the Wet Sprocket. TTWS is best known for their Billboard-charting hits, “Walk on the Ocean”, “All I Want”, “Something’s Always Wrong”, and “Fall Down”, among others. They share the kind of musical chemistry that can only come from meeting in high school and writing, recording and touring for over 30 years. Bring home this piece of music history, signed at their Playhouse gig this past year!

The auction closes on Tues, January 31, at 5pm.

Proceeds will benefit the Leir Foundation Arts for Everyone Outreach Program at The Ridgefield Playhouse!

CLICK HERE to learn more and place a bid!

Don’t miss out on this week’s fantastic line up-