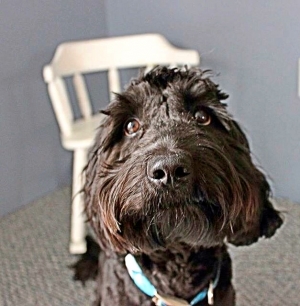 Local filmmaker and Wilton Magazine editor Megan Smith-Harris is making a new one hour documentary called BOY BLUE, a story about Liam, a young boy with autism and his assistance dog, BLUE.

The movie brings autism to light - teaching lessons of love and friendship (while incorporating a little rock and roll!)

I had the honor of interviewing Megan about the insightful documentary and learning about what she hopes to teach people about autism through the story of Liam and BLUE.

1. What inspired you to make this documentary?

I love kids and I love dogs so I was naturally drawn to the subject. I have a number of friends who have children on the spectrum so I have learned a great deal about autism over the years and wanted to honor those families by telling an uplifting story. So much of what you read about Autism Spectrum Disorder is gloom and doom and I thought it was time for a more hopeful, positive take. Liam is a delightful young seven-year-old boy with all kinds of interests – Wii bowling, reading, playing any kind of ball, gymnastics, swimming, and music. His autism is only one part of his personality and while he faces some additional challenges, he also has gifts yet to be revealed.

2. What do you feel separates BOY BLUE from other documentaries about autism?

There’s a famous saying, “If you’ve met one child with autism, you’ve met one child with autism.” Just because a child is on the spectrum doesn’t mean they’re all the same. So it stands to reason more than one film could be made on the subject. There are a lot of misconceptions and tired old beliefs out there such as, “children with autism don’t display affection” or kids with ASD are “burdens” to their family and these are just not true. Liam is a very loving child and in fact, he was initially misdiagnosed because of his playful, affectionate nature. Sometimes the more we “know,” the less we really now. It’s called a spectrum for a reason.

3. How did you find the Petersson family?

I was searching for the right family in the tri-state family so I would be able to throw our camera equipment in the car and get to their home any time I needed to. There are a lot of great families out there with compelling stories but the moment I saw a short video of the Petersson family I knew they were the ones. Why? I fell in love with the entire family–parents Tom and Alison, big sister Lilah, Liam and even Monte their other dog. I just knew in my gut that an audience would want to spend time with them too.

The only drawback is that they live in Nashville (arggghhh!) which isn’t exactly driving distance. Their geographic location has presented a logistical and financial challenge to the project, but when a subject is right, you have to go with it and make it work. We’ve shot Liam’s reality before BLUE arrived and we were there the day that Liam met BLUE for the first time. Now we’re in the process of raising production funding so we can travel back to Nashville one more time to capture the “after” and see how Liam and BLUE have truly bonded.

I’ve also been in regular contact with Liam’s parents to track the progress being made and now I’m really excited to go back and capture more footage. Previously, Liam would not sleep through the night in his own bed. Now he does. BLUE has been trained to “find Liam” so if his boy ever wanders off, BLUE will be able to find him. When Liam is frustrated or having a melt down, BLUE now comforts and calms him. This is really a very simple story about the relationship between a boy and his dog, and the impact the arrival of BLUE has on the entire family.

Fortunately, Patty Dobbs Gross, the founder and executive director of North Star Dogs, lives in Storrs, Connecticut so it’s easy to get to her. We’ve loved getting footage of the future assistance dogs when they’re puppies and we’ve been following another story line too. Patty’s son, Dan Gross extremely bright, tall, handsome and an accomplished editor. He graduated from the prestigious film program at U.S.C. and now two years later, despite sterling credentials, Dan is unable to find employment. Why? Because he has ASD. Unfortunately, eighty-five to ninety percent of adults on the spectrum are underemployed or unemployed. Because they can’t get a job they can’t support themselves so they often live at home. I call them the invisible minority. It is time for adults on the spectrum to be seen, heard and hired. I am hoping that the film will bring this important issue to light.

3. For those who don't know, explain how rock and roll plays a key role in the telling of this story.

Liam’s dad, Tom Petersson, is the bass player and a founding member of the band Cheap Trick. Tom and Alison have developed an album called Rock Your Speech, comprised of original songs that help teach language skills but are also great to listen to whether you’re a child or an adult.

4. Will we be seeing an all Cheap Trick soundtrack for the movie?

Sorry! That won’t be happening. However, we do hope to use a number of the Rock Your Speech tracks in the film. Music is a big part of the Petersson’s life and the RYS project is very much a family affair. Their 10-year-old daughter Lilah is already an accomplished singer and songwriter and sings on a number of the tracks. Alison came up with the concept and has helped develop the themes for the songs based on her experiences observing Liam’s learning process. Liam himself, appears in the “BLUE” video and loves both music and dancing.

5. What's the most important lesson you feel that Liam can teach us all about those who live with autism?

Liam’s mother says, “I want everyone to know that having a child with autism isn’t all bad, the way they make it out to me. Sure there are challenges, but there is a lot of love and a lot of joy in our family. Liam sees the world in a unique, unfiltered way and that can be very refreshing. Sometimes he’ll say things that we’re all thinking but might not say so he really makes us laugh too. BLUE is now a big part of our family and will help Liam grow and evolve socially and emotionally.”

As a filmmaker, I also want people to know that “a dog makes a difference.” A specially trained assistance dog can make an amazing difference in the life of a child with autism. They help to relieve anxiety, nurture a sense of security and allow a child to experience successful social interactions.  Perhaps most importantly, an autism service dog can provide non-judgmental companionship and comfort.

6.  How can people be involved or help?

Thank you for asking that! We want to ignite social change and there are many things people can do to help. We have a call to action on our website http://BoyBlueFilm.org.

You can help us finish the film in time for World Autism Day on April 2, 2015 (also known as “Light it Up BLUE”) by making a tax-deductible donation. Every person who makes a donation will have their name in the credits of the film.  People can “Follow” us on Facebook (https://www.facebook.com/BoyBlueFilm) and share the film trailer on social media. Tweet the link on Twitter and ask for a “RT.”

If you know someone with a connection to the autism community–a parent, sibling, uncle, aunt, or grandparent, caregiver, teacher–forward the link to our website and ask that person to forward it to five people. We are building a grass roots movement and everyone can be a part of that.

The next time you’re in a mall or grocery store and you see a child having a melt down, don’t judge the parents. Smile, offer to help, let them know you’ve been there too. That child might be on the spectrum and could be experiencing sensory overload due to the lights, noises, or unfamiliarity of the space.

Open your heart or home to a dog. Dogs are therapeutic for all of us. While we stress that it is probably best to opt for an autism assistance dog that has been bred and trained specifically for that purpose, the rest of us can experience the pleasures of being around a dog too. Adopt a rescue, volunteer at a shelter to help socialize unwanted or abandoned dogs, or become a volunteer puppy raiser and help train an assistance dog for another family.

Finally, be open to others with differences. Our mom’s were right–if we were all the same it would be a very dull world.

Click here to make a donation to the BOY / BLUE project.