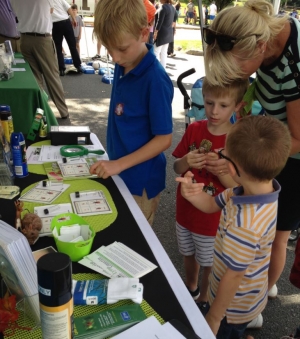 Governor Malloy's budget cuts are already being felt at the Ridgefield Health Department, where funds allocated to sustain and expand the town's BLAST Lyme Disease Prevention program were recently rescinded.

"This comes as a tremendous disappointment to all of the patients and health professionals who have worked tirelessly to develop a statewide, community-based Lyme Disease education effort," stated Jennifer Reid, BLAST volunteer program coordinator.

Reid explains, "The Connecticut Department of Public Health presented a plan that would not only sustain the BLAST program but ensure its use by health departments throughout the state. The legislators loved it and patient advocates were heartened to finally see Lyme disease getting essential attention. Everything was set to roll - literature, power points and health fair displays. Educators working out of local health departments would have been teaching best-practice prevention strategies by spring, when the threat of Lyme ramps up. But it all ended with one red line stroke by the governor."

Now, Reid is back at the drawing board trying to keep alive a program that everyone agrees is more necessary than ever. Last year, the BLAST educators - Reid and a team of trained college students and volunteers - attended over 30 health fairs and community events. They have attended over 200 events since the program began in 2008. From church halls to boy scout jamborees, Rotary Clubs to corporate wellness events, the educators have traveled from one side of the state to the other. Groups are already calling to book events for April and May. Ms. Reid is now asking the Ridgefield Board of Selectmen and the Western CT Council of Governments (WESTCog) member towns to consider funding this vital effort, which has exceeded the scope of a volunteer project.

If you would like to support the BLAST Lyme Disease Prevention program, please donate on our website at LymeConnection.org. All donations received from now through March 31 will go towards saving the BLAST effort.

We also ask that you write to your town leaders to tell them your concerns about the impact of tick-borne diseases in our state, especially if you have been directly affected. Connecticut will be impacted by nearly 30,000 new cases of Lyme disease next year, with most occurring in Fairfield County. According to the CDC, the total number of people diagnosed with Lyme disease is roughly 10 times higher than the yearly reported number.