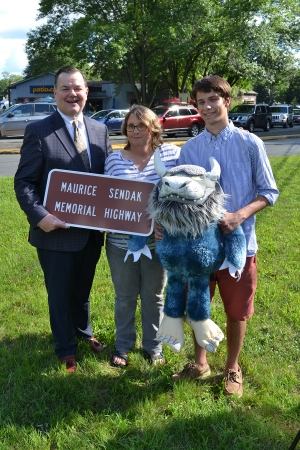 Rep. Frey had put legislation forth in 2015 to designate this strip of road in memory of the famous children’s author, who was a longtime Ridgefield resident. Among other works, Mr. Sendak wrote Where the Wild Things Are, a classic children’s book published in 1963.

Rep. Frey was first approached by Ridgefield resident Jake Madeson, now a sophomore at St. Joseph’s University, a number of years ago about the idea of dedicating a road in honor of the late author and worked with the state Department of Transportation to make the idea a reality.

“By dedicating this highway in his name, we are helping to honor his memory,” said Rep. Frey. “Mr. Sendak, widely considered the most important children’s book artist of the 20th century, not only contributed to the world at large with his works but also to our community as a resident, and I think by renaming this route in his honor, we are creating a small but meaningful and permanent tribute to him in town. Thank you for everyone who came together to make this happen.”

"I want to especially thank Jake Madeson, who as a high school student had the foresight, follow through and patience to bring this idea to my attention.  Jake's enthusiasm for honoring Maurice Sendak was contagious,"added Rep. Frey.