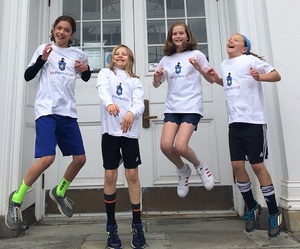 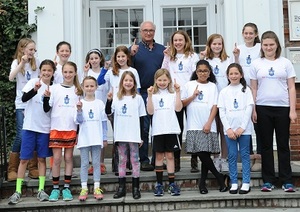 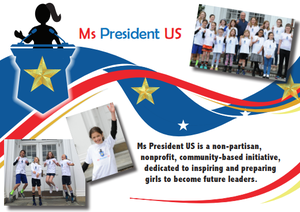 Ridgefield resident, Liz Fleuette, is the brains and powerhouse behind a brand new community initiative called Ms President US and has just announced that enrollment has now opened.

Ms President US is a non-partisan, nonprofit, community-based initiative, dedicated to inspiring and preparing girls to aim for the highest office in the US – that of President – and to believe they can achieve it.

Ridgefield girls in grades, 4-8 (ages 8 to 14) are invited to participate in Ms President US and can enroll HERE.

The Ms President US Story

Liz Fleuette doesn’t have to look far for inspiration. Her nine year old daughter, Maggie decided at the tender age of seven that she wanted to serve our country as President of the United States.

Fleuette, who has held a host of nonprofit leadership roles and earned Masters in Counseling Psychology from Northwestern University explains, “On November 8 I put my daughter Maggie to bed I said, I will wake you up in the middle of the night if history is made, and if not, I’ll tell you in the morning. When I woke up the next morning (after not waking her up) I had a deep feeling that inspired me to do something.”

Without skipping a beat, on November 9, Fleuette got to work laying the foundation for the brand new nonpartisan, nonprofit, community-based initiative, dedicated to inspiring and preparing girls to aim for the highest office in the US – that of President – and to believe they can achieve it.

“By the end of the day on November 9, I had signed up for a website, bought a PO Box, created an email address and started to draft my idea of how we could do this on a community-based level; increasing our girls’ awareness of their opportunity to be president one day,” Fleuette says.

Ridgefield girls in grades, 4-8 (ages 8 to 14) are invited to participate in Ms President US.

“Most of the initiatives out there target high school age and above, but pre-adolescent years are the height of self esteem building,” says Fleuette. Once they reach adolescence and head to high school, Fleuette say, “It starts to plummet.”

Ms President US will welcome girls in September, 2017. Interactive, leadership-based meetings will be held monthly through May. The girls will learn about local, state, and federal leadership opportunities, and explore their own potential to lead.

Fleuette says that beginning in March 2018, each each girl will begin to prepare their campaign for “Ms. President US – Ridgefield” using their choice of media or art, and addressing at least one issue (such as: school start time, anti-bullying, community programs and funding, etc.).

In the final session, the girls will give their campaign speech.

All program participants will then vote for the winner. The girl with the top score among all the ballots submitted will be elected Ridgefield’s Ms. President US.  The runner-up will be elected Vice President.

The girl who wins Ms President US will “hold office” for 1 year until the next girl is elected. During her “administration” she will attend, participate and speak at Ridgefield community events.

Fleuette’s hope is to pilot Ms President US in Ridgefield and expand the initiative throughout the country.

Want to support Ms President US?

Tax-deductible donations can be addressed to:

Questions? Email:  This email address is being protected from spambots. You need JavaScript enabled to view it.

Stay up to date on Ms President US happenings by visiting their Facebook Page here.