What's In, What's Out? Take Note Of New Recycling Rules 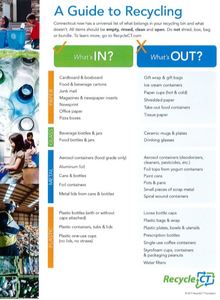 The Town of Ridgefield would like to inform the community of the New State Recycling Rules.

"The new program is the same concept there are changes to the things now designated as recyclables," stated Ridgefield Highway Department.

Enter the state-wide Recycling Campaign: "What's In, What's Out".

"What became clear in the previous program is that certain items contaminated the recycling stream making collected loads virtually unsalable and unusable, and they become trash.  Also, the machinery at processing centers clog and shut down from handling pill bottles, bottle tops, shredded paper and its dust, styrofoam and plastic bags," the Highway Department explains.

Downtime for those machines is costly.  The new term is called "mixed recycling".  It replaces the term "single stream" used since it was rolled out in 2011.  The name "single stream" was found to be confusing to many Connecticut residents.

According to the Ridgefield Highway Department, the new program and items designated recyclable is comprehensive, and is now the guideline for all 169 Connecticut cities and Towns to follow.  People may now recycle all of the same items throughout the State in the same way.