A Camel's Life in Ridgefield: Love Notes, Kisses and Selfies 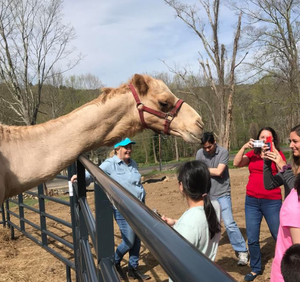 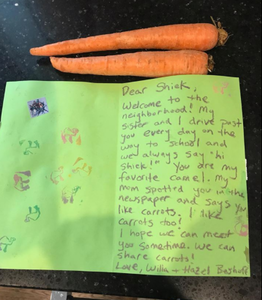 Sheik the camel has become quite a famous fellow since his Ridgefield debut just over of a month ago. There has been camel chatter, camel visits, camel love notes, camel selfies, and even camel kisses! One Hump Farm in Ridgefield has become the talk of the town.

Did you know? When it comes to camels, Robb Heering (Sheik’s owner) is the real deal. Robb, together with his wife, Stephanie rescued Sheik,  a dromedary camel (aka an Arabian camel) when he was just two months old after Robb believed the camel was being abused and mistreated by his traveling petting zoo owners.

Sheik’s story and Robb and Stephanie’s passion for camels doesn’t stop there.

Here, we talk with Robb Heering about rescuing Sheik, a camel’s life in Ridgefield, and how Sheik became the inspiration for Robb and Stephanie’s nonprofit, International Camel Rescue, and their business, Camel Life.

You rescued Sheik. Tell me about this.

In January 2015 I visited a fair in Florida and walked by the petting zoo section.  There were lots of baby animals there including a baby camel. I saw one of the workers giving an injection to the baby camel. When I asked if the camel was sick I was told that I wasn’t supposed to have witnessed the shot and that it was “just a mild sedative“ when I inquired further, I was told that the baby camel would run to the rear of the pen and the other animals would follow him, and,  when that happened, people wouldn’t stop by the petting zoo section to pay a dollar for handful of food to try to feed the animals.

So,  they were basically sedating the camel so it would stay still up in the front of the petting zoo. I took offense to this and viewed it as animal abuse.

That night, I researched camels online and found that a baby camel is supposed to be with its mother for at least 6 to 9 months.  I found out that the camel that I saw had been taken from its mother at roughly one month of age - [Sheik] was two months old at the time that I saw him. I found out that the petting zoo operation was based in Michigan and I spoke with the owner. Long story short,  three days later I was the owner of a malnourished frightened and mistreated baby camel.

A friend of ours owned a nearby polo farm and agreed to allow us to keep our camel there. My wife and I along with our four sons bottle fed him for about 7 months. Three bottles a day, every day. He is now 3 1/2 years old.

How did you come up with the name, Sheik?

My wife Stephanie named our camel on the day we rescued him. The name  Sheik was chosen to honor his Arabian heritage.

Sheik was your inspiration to launch International Camel Rescue, a 501c3 organization dedicated to rescuing camels at risk around the world. Tell me about this.

Sheik became my inspiration to form the International Camel Rescue, a 501c3 nonprofit in 2015.  The nonprofit’s mission is to rescue abused and at-risk camels globally. A second portion of the mission includes educating the public and small farmers of the many benefits of camels.

Immediately after rescuing Sheik I began a quest to learn all I could about camels. I traveled to the United Arab Emirates to visit a team of camel veterinarians employed by the royal family. That was three years ago. Today, we have a business and personal relationship with the ruling family.

You also are the founders of Camel Life.

In 2016 we created another company called Camel Milk Cooperative to help grow Camel dairy herds in the USA and to market camel milk in North America.

Tell me about Sheik’s visitors. How many? What do they do?

We have had roughly 1,000 visitors since Sheik arrived 4 weeks ago.

People come to take selfies, see a camel up close, feed him, pet him....and get a camel kiss.

When can people visit?

We were allowing visitors here at one hump farm on Saturdays between 9 AM and 1 PM but starting in June we will only have visitors on the first Saturday of each month between 9 and 1 PM. This will allow us time to finish construction here, grow some grass, and build the paddock.

Does Sheik have any favorite treats?

His favorite treats are carrots and pitted dates.

And the naysayers? Your property on North Street conforms to Ridgefield’s “hooved animal” ordinance. So what’s the issue?

I understand the laws and we ensured we jumped through all of the hoops. The presence of a camel on my property does not reduce anyone’s property values. In fact, it’s quite the opposite. My camel doesn’t bring or transmit ‘exotic diseases’ as one local lunatic opined.

The hooved animal ordinance in Ridgefield specifically names camels as allowed livestock although that law relates to properties under 1.5 acres. We have 2.4 acres....so technically I can have as many animals as I want - providing we don’t run afoul or related health codes.

We will bring in a friend and barn buddy for Sheik; we are waiting on the fence company to build a suitable paddock.

Anything you wish I asked?

My wife, Stephanie (McCleery), and I met in Ridgefield in 1979. She grew up here in town, graduated from Ridgefield High School. We were married at St. Stephens in 1983 and raised our four boys in Southbury. We moved to Florida 6 years ago and decided to come back to Connecticut. Stephanie always wanted to come back to Ridgefield...so here we are!