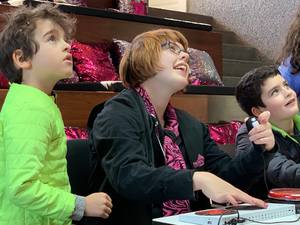 RIDGEFIELD, CT -- “Video games are more than millions of pixels on a screen. Gaming is a social activity. It’s fun, and playing games allow us to escape from our bodies and lives. Video games can get us moving, dancing, driving, and they are a common unifier to their players,” describes Valerie Jensen, the Founder and Visionary of The Prospector Theater, a 501(c)(3) non-profit which provides meaningful employment to people with disabilities through the operation of a premium, first-run movie theater.

Over the holiday season, Microsoft’s X-Box aired a commercial, “Reindeer Games,” featuring their newest product, the Adaptive Controller. The spot invites you to witness a neighborhood full of children and Owen, who is inside in his wheelchair, gaming while using the X-box Adaptive Controller. All of his friends celebrate together when he wins the game, reminding audiences of the magic of the holiday season and exemplifying that Microsoft is leveling the playing field by creating opportunities for all with accessible technology.

Jensen saw the commercial and immediately ordered the controller. “Microsoft heard us. They knew what we needed. They engineered and produced it,” she says. She introduced the commercial and the brand-new controller to her team, who understand the power of accessible technology for people with disabilities.

“Games are a common language,” she explains, “They can allow Prospects to help engage audiences. People who may think they don’t know how to speak to people with disabilities can confidently play a video game with Prospects and realize no one is all that different.”

Ian Foss, Director of Prospect Productions, had the opportunity to test out the adapter with Prospects and witnessed many playing video games for the first time! “Microsoft has also created a ‘co-pilot mode,’ where a typical controller is paired with the Adaptive Controller so that gamers can connect with friends and play together as the same character.”

Cubby played video games for the first time after Ian and his team “Frankenstein’ed” a custom joystick that had a limited amount of resistance, paired with the Adaptive Controller. Cubby was overwhelmed that he could finally play a video game, just like all of his peers. Kenny was impressed with the controller because he could use both hands to play and have complete access to all controls in the game, which he had never experienced. Claire pedaled to the medal driving in a video game for the first time – and loved the experience so much that her family bought an X-Box and Adaptive Controller so they can game together!

The Prospector Production team filmed a response for Microsoft that performed incredibly well on Facebook and Reddit, which can be seen here: http://bit.ly/ProspectorMicrosoft. The video led to a phone call with five Microsoft Leaders; Inclusive Lead, Bryce Johnson; Global Product Marketing Manager, Bree White; Program Manager, Evelyn Thomas; Director of Product User Research and HW Accessibility, Kris Hunter; and Global Advertising and Marketing Communications Lead, Stacey Terrien. Prospect’s Valerie Jensen, Mike “Munchie” Santini, Director of Research & Development, and Ryan Wenke, Director of Theater Operations, discussed the “Reindeer Games” commercial and the Prospector’s video, which Microsoft loved. As they learned more about the theater and its mission, Microsoft suggested the Theater and their company partner up for accessibility awareness in the future.

“One idea is to have the Theater participate with Microsoft in GAAD (Global Accessibility Awareness Day), which takes place in May,” Ryan Wenke says. “The Theater shared photos from our premiere of The Lego Movie Part 2. Prospects set up the Adaptive Controller in the Lobby and played LEGO Video Games with the audience. Our conversation with Microsoft will be ongoing and is fluid!” he continues.

The Prospector looks forward to partnering with Microsoft to raise accessibility awareness, beta test new products, and share goodness with the world.

The Prospector Theater, a 501(c)(3) non-profit, provides meaningful employment to people with disabilities through the operation of a premium, first-run movie theater located in the heart of historical, downtown Ridgefield, Connecticut. To learn more about The Prospector Theater, please visit www.prospectortheater.org or find us on your favorite social media platform.