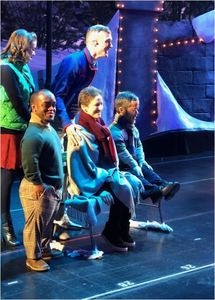 Christmas came a little early for a family in Ridgefield thanks to some caring Ridgefield residents, the team at Radio City Music Hall, and an international company that cares deeply about people - PepsiCo.

Upon learning of the families' plight from Carroll, there was no hesitation from all asked to answer this Christmas call. Allison Stockel, the Executive Director of the Ridgefield Playhouse, together with Carroll, some PepsiCo employees, and members of Radio City Music Hall team were committed to making Christmas dreams come true. And, this past Saturday, December 7 on the grand stage at Radio City Music Hall in New York City - they did.

Fewer than two years ago, this local mom lost her husband, the father of their two young children, to cancer.  Now, she is battling stage four ovarian cancer. "She wanted to make sure her children had a very special Christmas this year," explained Allison Stockel, Executive Director of The Ridgefield Playhouse. Stockel jumped in with both feet, eager to do all in her power to make this happen.

“I was told her ‘dream’ experience would be to take her children to see the Christmas Spectacular at Radio City Music Hall,” said Stockel, “I immediately got on the phone with my contact at PepsiCo, Lauren Libby.  I know that PepsiCo has a limited number of tickets for certain shows, so I presented the story to Lauren and hoped she would have something in their inventory.”

Because of the mother's health, she would need assistance bringing her two young children back and forth from Connecticut to New York City and Stockel knew that requesting five tickets was a big ask. "Everyone sprang into action," said Stockel. "PepsiCo immediately got Radio City Music Hall involved and the rest was a story that only dreams are made of," she added.

As luck would have it, not only was PepsiCo able to secure five tickets, but Stockel herself paid for the round trip car service to and from the city.  And then, just when you think it couldn’t get any better- it did.  “An email came from Radio City and PepsiCo saying that, if she felt well enough, they would love to have mom and her children do a walk-on role in the show!” explained Stockel.

"They got to sit on the bench and watch the ice skaters during the March of the Wooden Soldiers right on the stage of Radio City Music Hall. Imagine that," said Stockel.

This is the true meaning of Christmas.