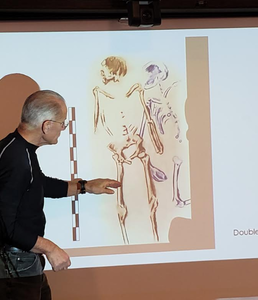 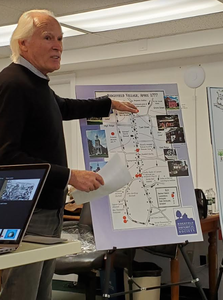 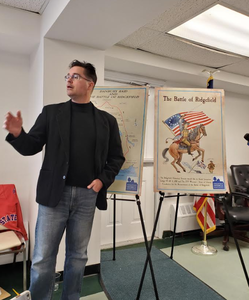 Today, after the discovery of skeletal remains beneath an 18th Century Ridgefield home, Ridgefield Historical Society held a Press Conference and introduced the media and community to a team of experts who are investigating what might be the first time in state history that soldiers from the Revolution have had their remains recovered from the field of battle.

“We are 85% to 90% sure they [the skeletons] are Revolutionary Soldiers. We can’t say 100%, but every indication reflects that hypothesis and we have found nothing falsify that hypothesis,” said Bellantoni.

Sharon Dunphy president Ridgefield Historical Society said that she received a notification on Tuesday, December 3 of the discovery of skeletons at a site that suggested a connection to the Battle of Ridgefield in 1777. “Our goal is to provide historical context for the discoveries and support the work of state archaeologist Dr. Nicholas Bellantoni while protecting the privacy of the property owner who has been extremely gracious in allowing Dr. Nicholas Bellantoni and his historians access. Laboratory work will now answer many questions and suggest the path forward to further study the entire battle,” explained Dunphy.

Professor Walter Woodward Connecticut State Historian, remarked, “There’s nothing quite like looking down at three men hastily buried in shallow revolutionary war graves. To focus one’s attention then and now about what it means to be an American. Who are these men and what did they die for?”

Bellantoni shared a composite sketch of the skeletons saying, “I will not show you any skeletal remains out of respect for the soldiers. I don’t believe that is proper.”

The sketch showed two skeletons co-mingled, one on his back. The robust adult men are lying in an east-west orientation (customary of an 18th-century Christian burial) in-ground that Bellantoni says appears to be haphazardly dug. The two skeleton remains were not clothed.

A third skeleton found about 15 feet away from the co-mingled skeletons and approximately 5’11” in stature, was seemingly not stripped of his uniform as indicated by a series of buttons as well as a textile that was discovered in the shallow grave.  “There were buttons from the neck to the abdomen,” said Bellantoni who added, “This individual appears to have 6 or 7 [18th century] buttons and at least one or two of them are pewter.” In addition to the buttons, a piece of textile was found next to the third skeleton which could be remnants of a shirt or a coat. “Getting that under a microscope to better understand where it may have come from in terms of a uniform,” said Bellantoni who added, “We have also found what appears to be leather in the upper neck

area.” This piece of textile has not yet been analyzed. “We have a lot of analysis to do,” said Bellantoni.

Could there be more gravesites in the vicinity of the Battle of Ridgefield? Yes. Bellantoni indicated that applying for National Parks Service “battlefield grant protection grant” to uncover the soil in the area where the Battle took place was something he would like to do.

As discoveries are made, the team working on his historical development will be in touch with the British consulate.

“When all the work is done, these men will be reinterred with full military honors and that will probably include both British and the United States. We will be in discussion with the British government,” explained Bellantoni.