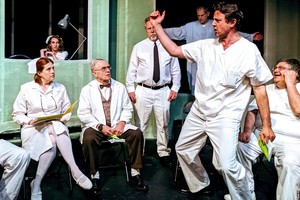 The Ridgefield Theater Barn, which received an impressive 23 nominations from Broadway World, has won Best Play (Non-Equity) for their production of One Flew Over The Cuckoo’s Nest. The play, by Dale Wasserman, based on the novel by Ken Kesey, was directed by Kevin Sosbe (who was nominated for Best Director) and closed The Theater Barn’s 2018-2019 season in June.

The story, which was a Tony Award-winning play before becoming an iconic film, is a dark drama exploring institutionalism and the celebration of humanity. Featuring a slate of incredibly talented area actors – many of whom also received nominations – The Theater Barn production was critically acclaimed by reviewers and audiences alike.

The Ridgefield Theater Barn, located at 37 Halpin Lane, is a year-round community theater that presents plays, musicals, improv comedy, cabaret shows, as well as special events in partnership with the Ridgefield Independent Film Festival and The Michael Chekhov Theater Festival, in an intimate space with cabaret seating. Patrons are encouraged to bring food and drink to enjoy before the show and during the intermission. Information about their upcoming productions is available at ridgefieldtheaterbarn.org.