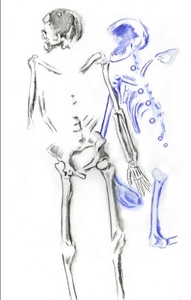 Dr. Nicholas Bellantoni, state archaeologist emeritus, has completed his fieldwork in Ridgefield after the discovery of yet another skeleton at the site, along with a significant collection of buttons associated with the last skeleton found.

During December, three skeletons had been discovered as the result of construction work in a basement. The first set of bones was removed by the state medical examiner’s office and determined to be ancient; Dr. Bellantoni was called in to assess the site and discovered two more skeletons of equal age at some distance from the first. All of them were described as robust young men.

Working with the Ridgefield Historical Society, which provided context for the discovery in relation to the Battle of Ridgefield, Dr. Bellantoni proceeded to uncover first one, then a second skeleton, buried somewhat haphazardly, but in the Christian tradition (on their backs, feet to the east).

The extraction of the bones was difficult because of the hard packed soil surrounding the second and third skeletons and concerns about the stability of the site led to a delay in removing one of the skeletons, Dr. Bellantoni said. Work resumed in January to retrieve this skeleton (designated “Burial #2”) and it turned out that there was yet another individual, further under the foundation.

“With permission and assurance” that the effort would not destabilize the foundation, “we continued a very difficult excavation, under tunneling for almost three feet to remove the new person (Burial #4),” Dr. Bellantoni said. “We were able to remove this individual completely and he turned out to be most interesting. Burial #4 had 28 brass buttons associated throughout his chest and arms, including cuff buttons. All buttons were badly corroded and need to be cleaned in the lab to look for insignia.”

“We would like to figure out who these people were and what their life histories were,” Dr. Bellantoni told UConn Today in a recent interview. “We might even be lucky enough to get to the point to be able to identify some of them in terms of actual family names.”

Throughout the process of retrieval and study, Dr. Bellantoni emphasized the care and respect that is being accorded these unknown 18th Century men. Whether it can be determined that they were in fact soldiers, and on which side of the conflict, is a question still to be answered, but indications are that these remains have much to reveal.

The Ridgefield Historical Society will provide financial support for the forensic work and for the eventual reinterment of the remains. Should they prove to be fallen soldiers of The Crown, they may be repatriated. State Historian Walter Woodward, who has also been involved in the project since the beginning, has informed the British Consulate of the discovery and will keep consular officials apprised of developments. If the studies reveal these were Americans, efforts will be made to more precisely identify them and then determine where their final resting places should be.

A special Battle of Ridgefield fund has been established by the Ridgefield Historical Society and donations to help identify and honor the men who died on Ridgefield’s battleground are welcome. Donations may be made online at ridgefieldhistoricalsociety.org or checks may be sent to the Ridgefield Historical Society, with the notation “Battle of Ridgefield,” 4 Sunset Lane, Ridgefield. For more information about the skeletons and updates on research, visit ridgefieldhistoricalsociety.org or call 203-438-5821.