Details
Published on Thursday, 28 May 2020 09:08
Written by Ridgefield Historical Society 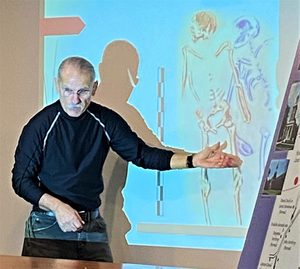 The Ridgefield Historical Society has received a $50,150 grant from the National Park Service: American Battlefield Protection Program for a two-year project whose goal is to develop a deeper understanding of the 1777 Battle of Ridgefield and its place in the history of the American Revolution.

“We are thrilled that the National Park Service has recognized our efforts to preserve the history of the Battle of Ridgefield and, of course, we are anxious to know as much as possible about ‘our’ skeletons,” said Historical Society President Sara Champion. “Many thanks to former President Sharon Dunphy and Development and Marketing Director Kathryn Tufano for their tireless efforts on our behalf to obtain this grant.”

The details of the battle itself have been documented in several histories, but the Historical Society, in its successful grant application, cited that the late 2019 discovery of skeletal remains near the site of the main engagement as the impetus for additional research.

Among the questions that historians hope to answer are:

Were the skeletons those of Patriots or Loyalists or British troops?

How did the noncombatant residents of Ridgefield interact with the soldiers?

What specifically did the British and Loyalist soldiers learn from the Ridgefield encounters?

Who buried casualties from the Battle?

Where are the other soldiers that died in the Battle buried?

Nicholas Bellantoni, emeritus State Archaeologist, who was in charge of the recovery of the skeletons in Ridgefield, believes there is a great deal yet to be learned about the Battle, both from continuing studies of the skeletons and associated materials, as well as from the work supported by the Battlefield grant.

To hear his comments, visit https://ridgefieldhistoricalsociety.org. Much of the battleground, including sites of skirmishes as well as the location south of the village occupied by the British overnight following the battle, has been largely privately owned and developed to varying degrees over the centuries.

There are also considerable municipal holdings in the center of town that are part of the site. The goals of the grant are to conduct additional research as well as build community consensus for preservation-related to the Battle.

A Battlefield Advisory Group is being formed, under the leadership of Ms. Dunphy, to guide the project and hire a qualified consultant to do the detailed research at local, state and national levels and to inventory previously collected artifacts attributed to the Battle. All of the documentation will be indexed, annotated and provided to the Historical Society.

The consultant will prepare a final report that describes the methods undertaken, a summary history of the Battle, preliminary assessment of the battlefield boundaries, and professional recommendations for additional research or archaeological surveys. Finally, the consultant will create a formal assessment of the integrity of core engagement areas and other key features and create a database of properties. The Historical Society will work with the consultant to share information with property owners about their land and its significant role in the history of the United States.

Supported by the American Battlefield Protection Program grant, the Ridgefield Historical Society and the State Historic Preservation Office will organize programs to inform and educate townspeople about the significance of the Battle of Ridgefield and the importance of historic preservation. At least four public meetings will be scheduled to share progress and discoveries and there will be monthly research updates on the Historical Society’s website.

In addition, the Ridgefield Historical Society and the State Historic Preservation Office will sponsor two planning charrettes about battlefield preservation with the goal of creating policies for areas under the highest risk of development.

The two-year grant is the beginning of what the Ridgefield Historical Society and State Historic Preservation Office anticipate will be a multi-year project to document and protect the site of Connecticut’s only inland battle during the Revolutionary War, an engagement in which General Benedict Arnold was a hero, for the Patriots.