Does Ridgefield artist Chris Curnan have a solution to bring Old Glory back to Town Hall? 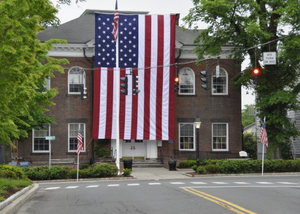 For the past two years, the gigantic American Flag, once anchored to two Siberian Elm trees from Memorial Day through July 4th, has not been in its rightful place in front of Town Hall. That’s because the two beautiful trees (whose life spanned 100 years) were removed in 2018 (because they posed a safety hazard) and an alternative solution to adhering Old Glory to the front of our Town landmark building has not been found.

That may be about to change thanks to artist and Townie, Chris Curnan.

First Selectman Rudy Marconi told us today that Curnan's plan is currently under review by the Town's structural engineers. "Chris Curnan came up with the idea to attach channel iron to the roof," said Marconi.

Since the removal of the trees, Maroni has investigated several options so the American Flag can return to the Town Hall building (please note that an American Flag continues to wave proudly on the Flagpole in front of Town Hall). These include (in Marconi’s voice):

So, rest-assured, Marconi and his team have tried. And now, thanks to Curnan, one solution may actually be a winner.