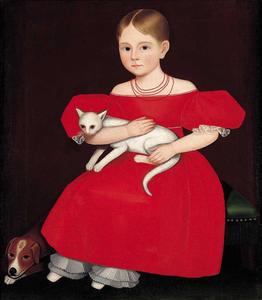 “I first learned about Ammi Phillips on Searching For The Lost Limner, an episode of Davis Dunavin’s Off The Path podcast,” said Co-Artistic Director Jonathan Winn. “He lived on the early American frontier, working as a traveling portrait painter throughout Connecticut, Massachusetts and New York. But he rarely signed his own work — the podcast explored the fascinating story of how his legacy as one of the most prolific folk painters of his time was uncovered. Just as fascinating was the world he lived in, bookended by the Revolutionary and Civil Wars. His life coincided with the gradual abolition of Slavery in Connecticut between 1784 and 1848. It is difficult to look at history through the lens of contemporary values, but the life and career of Ammi Phillips invites us to do just that. It is a reflection on living through great change.”

“We approached Jacqui because we are moved by her ability - in plays like The Arsonists and the Yale Award-winning Bottle Fly - to create complex tapestries of the American experience,” added Co-Artistic Director, Jason Peck. “Her characters are everyday, often overlooked Americans, whose struggles we connect with, while acknowledging their problematic legacies.”

Work on the new play will begin in January 2021. Workshops and public readings will be held in October of that year in collaboration with the Ridgefield Library, Keeler Tavern Museum and History Center, Ridgefield Historical Society, Kent Historical Society, and other local organizations. The American Folk Art Museum, whose collection includes several works by Phillips, will be working with Thrown Stone in an advisory capacity for the play.

Jacqueline Goldfinger collaborated with Thrown Stone on her play, The Arsonists, in 2018. Currently commissioned by The Wilma Theatre, The Arden Theater, L’Engle Estate/The Kennedy Center, and Florida Studio Theater, Goldfinger has a proven track record of successful commissions. She won the Yale Drama Prize, Smith Prize, Generations Award, Brown Martin Award, Barrymore Award, and Philadelphia Critics Award. Her plays have been on The Kilroy’s List. She’s been nominated for the Weissberger Award, Blackburn Prize, and Foote Prize.

Mr. Offutt lived for more than 30 years in Weston, Connecticut, in a house that he built. He created intricate works of art in the form of large steel sculptures which he displayed on property surrounding his Weston home. “Dan would have described himself as a ‘farmer,’ but he was much more than that,” said Richard Orenstein, the trustee of the Offutt Charitable Trust. “Those who knew him would remember him as a tennis player, traveler, sailor, metal sculptor, woodworker, fixer of anything, collector of everything, lover of projects, stock market investor, and a good friend.” After receiving an MBA from Columbia University in 1965 he had a career as a stockbroker.

Thrown Stone is one of several Fairfield County, Connecticut, nonprofits to benefit from grants from the Daniel E. Offutt III Charitable Trust. Recipients include the Weston EMS, Westport EMS, Weston Library, the Westport Historical Society; and others.

Thrown Stone’s mission is “to engage our region with new and reimagined theatre in intimate settings, creating a body of work that moves, connects, and challenges all who join the conversation.”

Thrown Stone’s 2021 season features the National New Play Network Rolling World Premiere of Annie Jump and the Library of Heaven by Reina Hardy, and the U.S. Premiere of the 2019 Olivier Award-nominated The Phlebotomist by Ella Road, both opening in July.