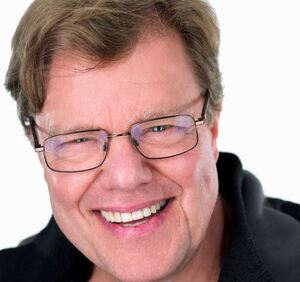 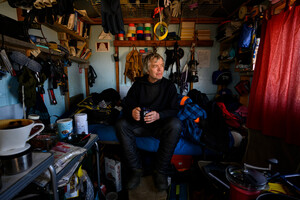 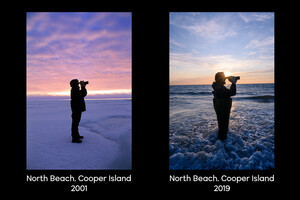 Watching The Earth Melt Away

Documentary films always play a pivotal role at the Ridgefield Independent Film Festival and this year is no exception. In addition to multiple feature docs, the Documentary Shorts lineup showcases four very different, but equally powerful films including Watching the Earth Melt Away directed by Ridgefield resident Joe McNally, an internationally-acclaimed, award-winning photographer and filmmaker. The film will screen live on Friday, October 16 @ 4:00 pm at the Ridgefield Theater Barn and is also available to screen virtually.

Watching The Earth Melt Away is a wake-up call to climate change. In 2001, McNally covered a story about George Divoky, an ornithologist who, at that time had spent three months every summer for the past 28 years, living on a Cooper Island, a forbidding stretch of ice north of Alaska, where he studied artic seabirds. Over the course of his study though, which has now spanned 46 years, Divoky had inadvertently amassed one of the world’s largest experiential accounts of global warning. In 2001, McNally took a breathtaking photo of Divoky standing on a stretch of ice with the artic sky behind him. When McNally returned to Cooper Island in 2019, he recreated the photograph. The glaring difference between the two said it all—Divoky was standing knee deep in water. The magnitude and speed with which the landscape had melted and changed is heartbreakingly evident in the haunting film, Watching The Earth Melt Away.

MSH: You’re a photographer and documentary filmmaker who has worked on assignment in 70 countries. Name your top three and tell us why they’re you’re favorites.

JM: The United Kingdom—there is so much history and kinship. Romania—beautifully enchanting and has an element of the unknown. Russia—strikingly photogenic, forbidding, tough, but beautiful.

MSH: You first interviewed ornithologist George Divoky in 2001. What was the greatest surprise when you interviewed him again in 2019?

JM: For both of us, it was the massive loss of ice. George and I couldn’t stop talking about it and how fast it had occurred since 2001.

JM: I hope they feel a sense of immediacy about their own actions. What can they do to help? It’s been encouraging to read the reactions of those who’ve already seen it online and the gut-punch the film can have for someone who perhaps does not pay regular attention to the idea of Climate change. I hope viewers contribute to causes (such as Friends of Cooper Island), get more involved, and actively support policies and politicians who vow to take corrective action.

MSH: How has making this film changed you on a personal level?

JM: It is deepened and enriched my sense of how important pictures are. Additionally, as a photographer how important it is to maintain relationships and friendships.

MSH: What was your greatest challenge in making this film?

JM: Logistics! The daunting transit to Cooper Island in Alaska has to now occur via boat because of the ice loss. And the Beaufort Sea is an unpredictable body of water.

MSH: And what was the greatest reward?

JM: The furtherance of my friendship with George, who is just an extraordinary individual on so many levels. Another great reward was the spontaneous burst of laughter and emotion seen on the film when we both got out of the surf from recreating the picture from long ago.

MSH: Is it too late to fix things? What needs to happen?

JM: In regard to climate change, it’s very important to maintain resolve and not give up hope. I look to George for that, because George is absolutely committed to doing whatever is still possible to change course in the Arctic. A change of course needs to be immediate; we can’t think it’s too late.

MSH: Are there more documentaries in your future? What topics are you considering?

JM: Yes! At my core I am a curious person and there are many, many topics and stories I would like to tackle. We are currently involved in researching traditional, out of the way European cultures.

MSH: How have you occupied yourself during this period of sheltering-in-place?

JM: I am in the course of writing a new book and re-examining 40 years of a photographic archive. I’ve also gotten to know our town of Ridgefield a little better, and it is a truly wonderful place!

JM: I am very honored to be a part of the Ridgefield Independent Film Festival and to have our film and our team recognized. It’s amazing to have this kind of support for the Arts right here in our hometown.

MSH: For our part, we truly feel honored to include your powerful film at RIFF 2020. Thank you for all the sacrifices you made to get Watching The Earth Melt Away made.

Watching The Earth Melt Away screens as part of the Documentary Shorts Program on Friday, October 16th @ 4:00pm, along with Ghost Mountain, Shannon Amen, and The Physics of Sorrow.

RIFF 2020 showcases 60 compelling films from around the world October 14 –18. Live, socially distanced screenings (masks are mandatory) are limited to 35 audience members and take place at the Covid-compliant Ridgefield Theater Barn located at 37 Halpin Lane, Ridgefield. Virtual screening options from the comfort of your own home are also available. For more information or to buy tickets or virtual passes, please visit RIFFCT.org