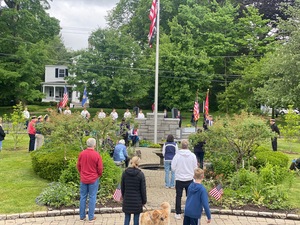 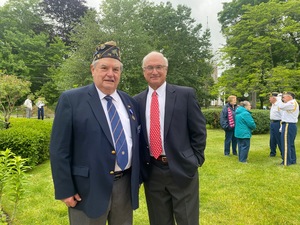 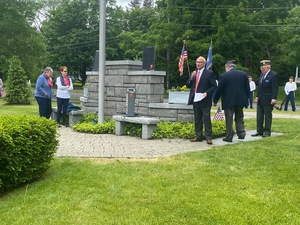 Ridgefield honored our country's bravest today with Military Honors at the Veterans Garden located in front of the historic Lounsbury House.

We gather here today to remember those who have died serving our nation. They are heroes in the truest sense of the word, making the ultimate sacrifice for their county. It is a day to understand that their sacrifices were not in vain. Each and every day, we enjoy the freedoms they died to protect. This means on Memorial Day, we should remember never to take these rights for granted.

Lead by George Besse, Commander of American Legion Post 78, the patriotic event included a three rifle volley and a 21 gun salute, an honor reserved for the President, ex-President and President-elect of the United States. Besse said, "The people we are honoring today deserve a 21 gun salute!" After the guns were fired, two talented young residents played Taps.

The final salute to our military heroes came by way of a C-130 Jet that flew over Ridgefield.

Thank you to George Besse and your fellow American Legion Post 78 members for honoring our bravest.