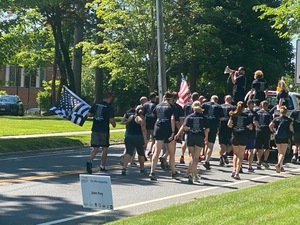 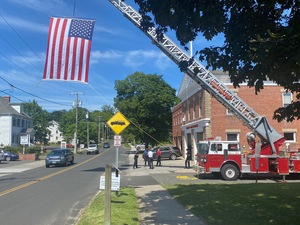 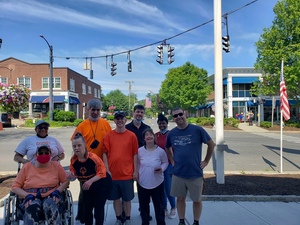 This morning the Ridgefield Police Department participated in the Law Enforcement Torch Run for CT Special Olympics! Members of the department and Special Olympians ran through town carrying the “Flame of Hope.”

The run began at Dimitri’s, made its way to East Ridge Middle School, then to Veterans Park, and to Town Hall where they were met with many cheers from onlookers including First Selectman Rudy Marconi. The officers ran down Catoonah under a large flag that hung in front of the Fire Department.

Photo #3 shows members of Special Olympics in front of Town Hall where First Selectman Rudy Marconi held a brief ceremony prior to the start of the Torch Run.

According to Special Olympics, LETR began in 1981 when Wichita, Kansas Police Chief Richard LaMunyon created the Torch Run. He thought the Torch Run would help law enforcement be active in the community and support Special Olympics Kansas. In 1983, Chief LaMunyon presented the program to the International Association of Chiefs of Police (IACP). They decided to endorse Torch Run and became the “Founding Law Enforcement Organization.” With the IACP’s support, LETR became the movement's largest public awareness and fundraising group for Special Olympics.

The Torch Run for the Special Olympics covers over 500 miles and goes through 100 towns.