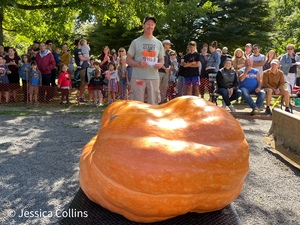 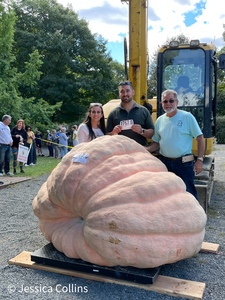 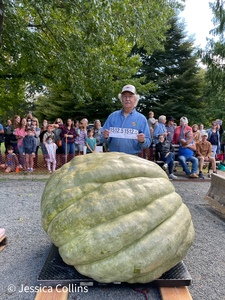 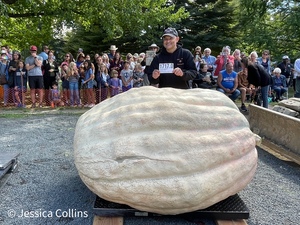 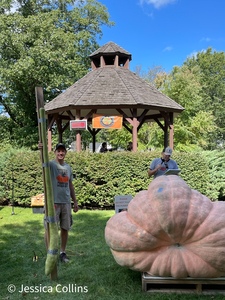 Visitors enjoyed shopping, children's activities, eating pizza made on the Genoa pizza truck and waffles from Waffle Cabin, met several animals from Henny Penny Farm, listened to music performed by the Ridgefield Suzuki school and Bach to Rock, and cheered as the giant pumpkins arrived and took their turns on the scale.

Weighing began at noon with a giant tomato weighing in at 1.940 pounds, grown by Ken Carlson from Danbury. Ridgefield's own, Steve Maydan, won the long gourd category measuring 81 inches. Next up, Steve Maydan's marrow topped the scale at 35 pounds. Zach Scott, a youth grower from New York brought a giant that weighed in at 839.5 pounds. Steve Maydan's pumpkin grown right here in Ridgefield (see photo #1) weighed 993 pounds!
The top five giants all weighed in at over 1,000 pounds each. Joe Jutras, who holds the record for biggest ever weighed in Ridgefield which was set at last year's event (1,954 pounds) brought a giant squash that went heavier than he expected at 1,512,5 pounds! Tony Scott set a personal best with his giant at 1,717 pounds.
Top honors (and personal best) went to Matt Gawell from NY whose giant weighed in at 1,767 pounds!
Many thanks to the giant pumpkin growers who chose our event to weigh their giants. Also, thanks to our vendors, sponsors, musicians, volunteers, and all who come out to the park to celebrate giant pumpkins. This event was made possible by the generous support of our sponsors: Danbury Agway, Ridgefield Overhead Doors, Ridgefield Parks and Rec, Hollandia Nursery, Henny Penny Farm, Ridgefield's HamletHub, Macaroni Kid of Greater Danbury.
For additional photos and information, visit Jessica Collins Photography and Blog online here