Love and Light in Downtown Ridgefield, The Holiday Season Officially Kicks Off! 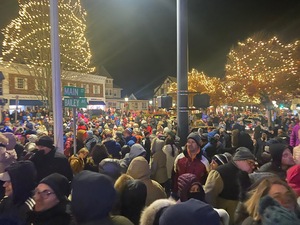 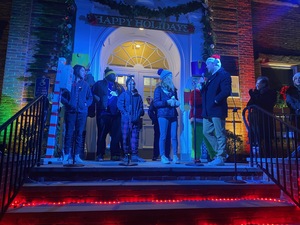 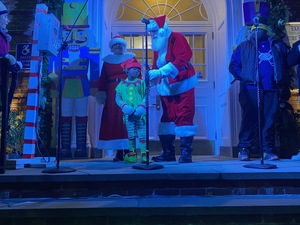 A Magical Night of Song, Santa, Lights and Love

On a chilly and windy Friday evening, the day after Thanksgiving, thousands of community members descended upon the downtown area to see Main Street trees sparkle and celebrate the start of the holiday season! It was truly a sight to behold!

By pre-recorded audio, longtime Tree Lighting Master of Ceremonies, Ira Joe Fisher spoke to the crowd, sharing his sentiment for a happy holiday season and letting the community know that he was recovering from an accident and thus was unable to perform his traditional ceremonial duties.

Three young community leaders, part of the Boys & Girls Club of Ridgefield family, Timmy Cozens, his sister Annie and Triston Philip (aka “Big Paw”) took the reins, informing the large crowd that Santa was spotted in Newtown and headed toward Ridgefield! While waiting for the jolly man of Christmas to arrive, Ridgefield High School a cappella group, the Nightingales sang classic holiday songs.

Santa and Mrs. Claus joined Timmy, Annie, and Triston on the steps of Town Hall singing accolades for Ridgefield before settling into the “North Pole” at Coldwell Banker Realty, to greet children.

The holiday celebrations continue next week in Ridgefield with the Holiday Stroll on December 3 and December 4. Learn more here.