Rooted in Ridgefield history at RGOA: Norway Maple could be a national champion 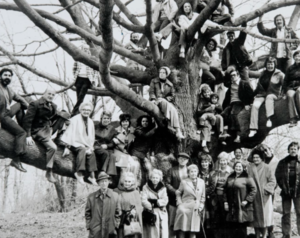 The stunning (and huge) Norway Maple outside of the Ridgefield Guild of Artists is already a champion in Connecticut, now it's on the way to national stardom

When Pound Ridge resident John Kelly arrived at the Ridgefield Guild of Artists (RGOA) on Halpin Lane to view an exhibit on July 8, he was mesmerized by a piece of art, before he even entered the gallery.

It was a tree. But, no ordinary tree, the largest tree he had ever set his eyes upon. “I wondered what kind of tree it was and when I looked at the leaves, it was clear that it was a Norway Maple,” says Kelly.  After marveling at the tree, Kelly walked into the RGOA and immediately saw a photo of that same tree. “It was taken fifty years ago and all of the trustees were all sitting in the tree and it said, Norway Maple. I started to inquire and spoke to the lady who was at the desk."

Kelly was told there were plans to pave around the base of the tree to increase the size of the parking lot. “I asked when are they going to do that and she said, very soon. So that’s when I was on a mission,” said Kelly. "The photo triggered me. That was a great tree then…we gotta save this tree!"

Kelly reached out to Stamford Arborist Ryan O’Leary. “He told me that paving around the base [of the tree] will kill it. Besides not getting water, it won’t get nutrients.” O’Leary took a trip to Ridgefield to look a the tree. Kelly recalls, “He said, oh my god, this is the biggest Norway Maple I’ve ever seen. This looks like a new National Champion!

Notoriety was on the horizon for this historical Norway Maple located on Halpin Lane.

Currently deemed a “co-champion” in Connecticut, a necessary step to be considered a champion on the national level, Kelly says Ridgefield’s Norway Maple must now be nominated to achieve the next level of greatness as a “Champion Tree” on the American Forests official website.  “I’m going to be the nominee. I’ve done that hard part,” says Kelly, which includes taking photographs and getting official measurements.

Glastonbury resident Frank Kaputa is the “official” Connecticut tree measurer. “He and the Arborist [Ryan O’Leary] officially measured the tree and it came out to 291 points. [Learn about the point system and how a tree is measured here.]

291 points IS BIG. Any competitors?

Kelly explains, “As we continued to visit this tree, we noticed that when all the other trees were turning colors. The tree stood out,  not one single leaf of the thousands of leaves on the tree had turned, they were all brilliantly green and the Arborist said, This is a sure sign of a very very healthy tree.

By November 1, 2022, the new National Champion trees will be announced. “If that tree in Montana still exists, we’d be listed as the “Co-national Champion,” says Kelly.

“This is a tree that’s hopefully going to be around for generations to come,” he says.

*Technically the tree has to be 3% points larger to win in size. Read about the nomination process here.