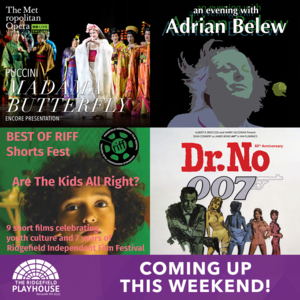 It’s a full weekend of events at the Ridgefield Playhouse! Tonight Madama Butterfly returns for an encore in HD screening, legendary guitarist Adrian Belew performs career highlights from Bowie and beyond on Saturday, and Sunday is for movie lovers with RIFF Shorts Fest and Dr. No: 60th Anniversary Screening come to the big screen on Sunday!

Then on SATURDAY, AUGUST 20TH AT 8PM, progressive rock icon ADRIAN BELEW is returns to The Playhouse for the first time in almost a decade for his only Connecticut show! Best known as the lead singer and guitarist for King Crimson, Belew’s storied career has also included extensive touring with artists like David Bowie, Frank Zappa and Talking Heads. An Evening with Adrian Belew is part of the Pepsi Rock Series Driven by North American Motor Car.

Movie buffs will want to head the the Playhouse on SUNDAY, AUGUST 21st. At 2pm the Best of RIFF Shorts Fest will screen 9 short films celebrating youth culture and 7 years of Ridgefield Independent Film Festival. Following the screenings will be a panel discussion moderated by Lisa Cambridge-Mitchell, featuring many of the filmmakers along with film critic, Joe Meyers on the history and language of youth in cinema, and a presentation of RIFF's Emerging Filmmaker Award to Ridgefield resident Nicholas Burns for his film, “Nothing is Going to Change”. Screening running time is 103 minutes.

Then Sunday evening brings “Bond, James Bond” to the big screen! A 60th anniversary screening of Dr. No will happen at 7pm as part of the Cohen and Wolf P.C. Movie Series. Dr. No marks the explosive film debut of, Ian Fleming’s immortal action hero, James Bond, played here by Sean Connery. Bonus content includes Being James Bond, where Daniel Craig candidly reflects on his fifteen-year tenure as James Bond. Includes never-before-seen archival footage spanning from ‘Casino Royale’ (2006) to ‘No Time to Die’ (2021).

For more information or to purchase touchless print at home tickets, go online at www.ridgefieldplayhouse.org or you can visit or call the box office (203) 438-5795. The Ridgefield Playhouse is a non-profit performing arts center located at 80 East Ridge, parallel to Main Street, Ridgefield, CT and is committed to keeping the arts alive and available to all.