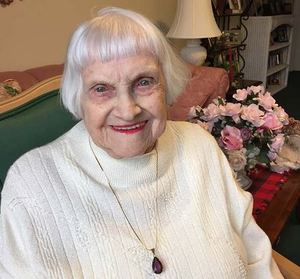 Loretta Geraldine Gardner, 100, passed away on November 4, 2016 surrounded by her family. "Geri", as she was known, was born on February 28, 1916 in New Brunswick, New Jersey. She was the daughter of James Anthony Kelly and Loretta Cosgrove Kelly, who predeceased her. She was also predeceased by a brother, James, and a sister, Bernadette.

Geri attended New Brunswick schools, until she left at age 14 to help support her family during the Depression, eventually landing a job at Bakelite Corporation in 1937. There she worked in quality control in the Bound Brook, New Jersey plant where she assisted Dr. Baekeland, inventor of plastics, in trying out new uses for this revolutionary product. When Bakelite was sold to Union Carbide Corporation in 1939, she became a Carbide employee for the next 40 years, working in cost accounting and distribution. Along the way, she attained her General Education Certificate at age 50.

Geri was married in 1947 to Joseph John Homall who had recently returned to his position at Pathe Film Corporation after having served in World War 2 in North Africa and Italy. A daughter, Geraldine, was born to them, just months before Joseph met an untimely death at age 42. Undaunted, Geri enlisted friends and family to complete the building of her home while returning to Union Carbide where she worked until retirement.

In 1980, Geri married Joel H. Gardner, a retired Vice President of Central New Jersey Bank and former captain during World War 2. She retired after 42 years of service with Union Carbide and moved to Brielle and later Brick, New Jersey. After Joel's death in 2002, she moved to Meadow Ridge in Redding, Ct., where she had many friends and was near her daughter and grandson. She was a member of St. Mary Parish in Ridgefield.

Mom was a determined woman who worked hard to give me the education she was not able to afford herself. She loved working with her hands and was very accomplished in needlepoint and knitting. Additionally, she loved home improvement projects and, in her earlier days, was known to happily wall paper, paint and plaster. She loved her family, particularly her grandson, Matthew. She said exactly what she thought, was always in a hurry, and her many friends and extended family fondly regale in telling "Geri Gardner stories", knowing full well she was one of a kind.

Geri Gardner is survived by her daughter, Geraldine Hotard of Ridgefield and her grandson, James Matthew Hotard of New York City. A Mass of Christian Burial will be held at St. Mary R. C. Church on Friday, November 11 at 1:15 p.m.; interment will take place in St. Catharine Cemetery; Sea Girt, NJ., there will be no calling hours. In lieu of flowers, donations to the Ridgefield Visiting Nurse Association will be appreciated. Kane Funeral Home is in charge of arrangements.