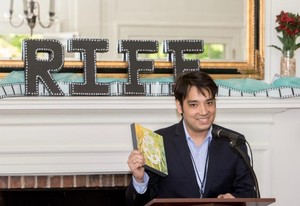 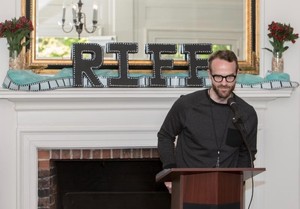 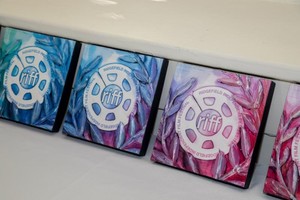 The Ridgefield Independent Film Festival (RIFF) concluded on Sunday afternoon with the presentation of the RIFF Awards at a ceremony at the beautiful Keeler Tavern Museum Garden House. Festival Co-Directors Jill Mango and Sean M. Murphy handed out the awards in eight categories, with the Grand Jury Prize going to the indie comedy, What Children Do, a hilarious new film by Minnesota-born, Brooklyn-based filmmaker Dean Peterson. Complete list of winners below.

What Children Do was shown as RIFF's Saturday Night Marquee Feature at the Ridgefield Playhouse over the weekend. It tells the story of two estranged sisters who are thrust back into each other's lives by the impending death of their grandmother and are forced to try to repair their feral relationship. Peterson, actress Grace Rex, director of photography Darin Quan and producer Ariana Janetakis joined The Reel Dad columnist, Mark Schumann, for a lively post-film Q&A.

Peterson accepted his award in person, as did Samar Salam, one of the directors of The Ides of Childhood, which won Best Documentary Feature. Salam traveled to the United States from Calcutta, India for the first time ever to attend the World Premiere of his film at RIFF. The Ides of Childhood is a journey through Kashmir, a country at war for decades, and tells a story of tragedy, courage and hope for a land and a people.

Carrying on the tradition begun by RIFF Founder Joanne Hudson in the first year of the festival last year, this year's RIFF Award was also an original piece of artwork. Ridgefield artists Hans Fischer and Joshua Fischer collaborated on the award. The father and son team used mixed media, including paint, paper and graphite to create the eight awards, which vary by color. When displayed together, the awards presented a spectrum effect. The Fischers also designed the cover for the RIFF Festival Guide this year, which is a sketch based on their RIFF Award design.

Best Documentary Short: The Other Side (Spain) - Directed by Griselda San Martin

The Ridgefield Independent Film Festival, founded by local playwright and theatre director Joanne Hudson, is an intimate, international and inspired film festival that aims to make the world a more compassionate place through the sharing of stories from around the globe through cinema. Each spring, RIFF brings dozens of films to Ridgefield, Connecticut (just 60 miles northeast of New York City) for thoughtful screenings in curated venues including the Ridgefield Playhouse, Ridgefield Library, Aldrich Contemporary Art Museum, Keeler Tavern Museum and the Prospector Theater. In addition, RIFF offers master classes in different aspects of film and filmmaking. More info at www.riff.website.