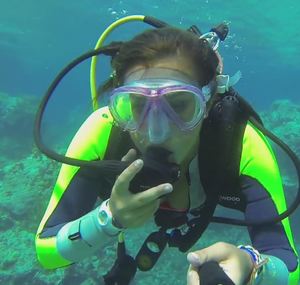 The science and technology TV show that airs on Fox-affiliate stations, Xploration Station, has announced that Ridgefield resident, Alexandra DiGiacomo has been named a finalist in their Student Explorer contest.

Xploration Station explains, “We believe in learning about the world around us through science and exploration. That’s why we launched the first-ever #StudentExplorer contest, which will award one student an all-expenses paid trip to Mexico to locate and swim with migrating whale sharks alongside Philippe Cousteau.”

An undergrad student at Duke University studying Marine Biology, DiGiacomo will be in Mossel Bay, South Africa interning with Oceans Campus, during the Xploration Station trip. There, she will be researching the predator-prey interactions and relationship between Great White Sharks and Seals. She told Xploration Station that if she were selected she would not be able to attend because of this prior commitment.

As a student at RHS, DiGiacomo authored a book, “A Familiar Fin” and traveled to area schools and camps to share her passion for science with young children. In addition, she launched a website and blog, “Saving Sharks for Safer Seas” with a mission to save sharks from toxins and agricultural waste. DiGiacomo explains, “Current pollution, toxins, especially from that of agricultural waste, are strong by the shorelines where many sharks roam.

DiGiacomo has stated, “I’d like to use cinematography to inspire all young scientists to pursue fields in STEM and use research to successfully protect our environment.”

Following her trip to South Africa, DiGiacomo will travel to Oxford where she will study as an A.B. Duke Scholar. She plans to pursue a career in shark biology or behavior.

To learn more about Alexandra DiGiacomo, visit her website, “Saving Sharks for Safer Seas” here. Her website features her blog about her personal experience with sharks.

You can purchase her book, “A Familiar Fin” here. All profits go to Sharks4Kids, an organization that strives to educate kids across the country about the importance of sharks.