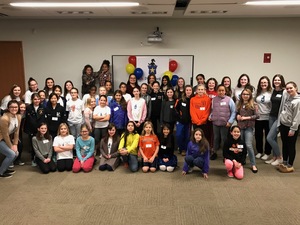 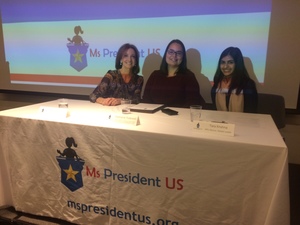 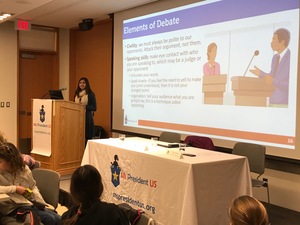 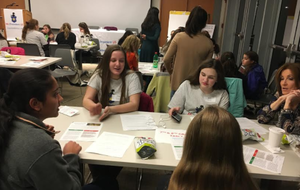 On Friday evening, December 8, the girls’ civic leadership program, Ms President US, held its fourth monthly session at the Ridgefield Library. Entitled “Debating Among Federal Leaders”, this module offered participants an overview of how our federal government is structured, provided key lessons on how to debate properly and provided the girl an opportunity to put those lessons to use.

The session kicked off with presentations by Stephanie Podewell, District Director and Deputy Chief of Staff to Connecticut Congresswoman Elizabeth Esty (D-5th), as well as former New York Congresswoman, Dr. Nan Hayworth (R-19th). Ms. Podewell provided the students an inside look at the workings of a congressional office both in Washington as well as in the district they represent. Dr. Hayworth, the first female physician ever elected to Congress, took the girls through the composition of our three branches of federal government and imparted an insider’s view of the life of a US Representative.

The first portion of this module concluded with an insightful lesson on debating skills by Tarini Krishna, the only female member of Ridgefield High School’s varsity debate team, who spoke commandingly of the most effective ways to communicate one’s position and win debates.

Following the conclusion of these presentations, girls in the Ms President US program broke into pairs and conducted a “tennis debate” where one side argued the affirmative and the other had the chance to rebut a series of topics. The participants also had the benefit of input from the three presenters who visited each table and offered constructive guidance and encouragement.

“It was interesting to hear from leaders in our government and our town and use what they told us right away”, said Nola Peressutti, a Scotland fifth grader enrolled in the program.

“Through Ms. President, girls learn not only how to be engaged citizens, but also how to become women who will lead our nation,” observed Dr. Hayworth. “It was a privilege for me to participate in the December session in Ridgefield, and I’m hopeful that this exciting program will become available throughout our country in the years to come."