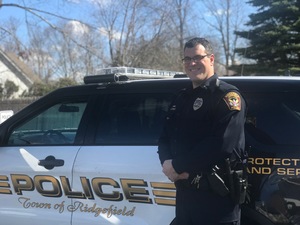 Officer Chris DiFalco, a resident of Bethel, has been named Ridgefield Police Department’s Officer of the Year.

“I’m deeply honored, there are a lot of deserving people here,” remarked DiFalco.

A five-year member of the Department, DiFalco is deeply invested and committed to the Ridgefield community.  Spearheading Save a Suit for veterans at Dapper Den Barbershop in Ridgefield, conducting numerous car seat inspections and installations, and helping locals in need with his brainchild  “Repair Because We Care” are just some of the ways DiFalco gives back to the community and wears his heart and his badge on his sleeve.

“Chris' efforts example the values of the Police Department; an Officer who cares for others, places service above self and is dedicated to the safety and security of the community of Ridgefield,” says Roche.

DiFalco says it was when he was a criminal justice student at West Conn that it “clicked”. And “it”, serving as a police officer, appears to have been his destiny. “I come from a family of cops, my father, grandfather and my uncle were all New York City  PDs.”

DiFalco absolutely loves his job. “When I first started, I couldn’t believe I got paid for doing this,” he says. “There’s never a boring day. I go to the same job, but everything is different. There’s always something... a curveball, ” he adds.

Perhaps the biggest curveball came in 2014 when DiFalco was a Ridgefield PD newbie.

“I was fresh off of training on the midnight shift. I was coming around Pope’s Corner behind the high school and there is a donkey in the middle of the road.”

DiFalco recalls, “I’m like, What the heck do I do with a donkey, they didn’t teach this. Am I supposed to know what to do?”

Here’s how it the donkey story goes: “I get out of the car and the donkey sits right in front of the car. I pet him, then I call HQ [headquarters] and I’m like…"

DiFalco:  I have a donkey in the middle of the roadway.

DiFalco explains. “I had a dog leash. I put the dog leash around the donkey’s neck. I’m trying to get him off the ground and he’s not moving. Donkeys are really heavy by the way. He was a big boy. I’m like, Let’s GO! So he gets up and starts running up the road.”

DiFalco follows the donkey up a long driveway in Ridgebury and watches the donkey run around the side of a residence.

DiFalco will be honored in May at a special ceremony at the Leir Retreat Center in Ridgefield.

“It’s nice to get recognition, You work hard, you try to make a difference,” remarks DiFalco. “I think I do,” he adds.