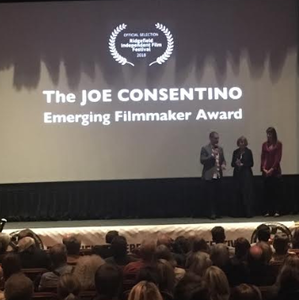 Ridgefield Independent Film Festival opened tonight at The Ridgefield Playhouse! As part of the Opening Night festivities, RIFF announced that Noor Gharzeddine, director of Are You Glad I'm Here received The Joe Consentino Emerging Filmmaker Award, an award given in memory of  Ridgefield resident and filmmaker Joe Consentino.

You can watch the film tomorrow night, October 20 at The Ridgefield Playhouse beginning at 6:00 PM. There will be a Q&A with Filmmaker Noor Gharzeddine following the screening. Purchase tickets HERE.

About Are You Glad I'm Here

A millennial American girl befriends a Lebanese housewife and disrupts her ordered life; one night they become accidental partners-in-crime.

Despite the cross-cultural differences and complications that pepper the story, Are You Glad I’m Here, explores a universal familiarity between the women that transcends traditions and age. These are women with very little in common and yet find strength within each other, the film is an often transfixing visual experience that balances vicious dark comedy with unimaginable tragedy.
A methodical, purposefully-paced thriller, it holds true to many of the genre’s more recognizable conventions while mixing plenty more powerfully personal and cultural aspects that have surprising impact.