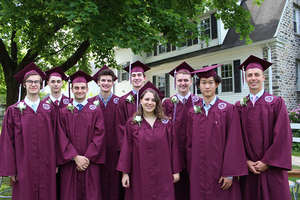 Congratulations to Ridgefield residents, part of Wooster School Class of 2019

Cooper will be attending Boston College and is the recipient of the United States Army ROTC Scholarship.

Niav Doyle, daughter of David Doyle and Pam Custode of Ridgefield will be attending Skidmore College.

Sam MacMillan, son of Douglas and Brenda MacMillan of Ridgefield will be attending High Point University.

Sawyer Moore, son of Heather Moore of Ridgefield and the late Jeffrey Moore of Danbury will be attending High Point University.

Jacob will be attending Colorado College where he will also committed to playing lacrosse.

Connor will be attending Elon University.

Tyler will be attending the University of Maryland, College Park.

The ceremony featured a number of speakers, and the awarding of prizes and diplomas. President of the Wooster School Board of Trustees, Leon Weaver offered kind words to Wooster’s soon-to-be graduates. “Your generation, born in the 21st century, has the opportunity to be this century’s greatest generation not for what you will do but for who you are."

Dr. Tyrone Black, Director of Middle and Upper Schools announced the honorees for, “Crayons to Commencement,” commending students who began their Wooster careers in the Lower School. Prizes were given out for outstanding Senior Independent Study projects, academic achievements, and awards of character, followed by an address by the class orators, Andrew Felton '19 and Jacob Smith '19. "Being gentle, generous, truthful, kind, and brave will be ever present in us especially as we give our heartfelt thanks and farewells on this day," remarked Felton and Smith. They added, "We have learned to be gentle with our strength, to be generous with ourselves and others as we try and fail, to be truthful as we forge lasting friendships and seek knowledge, to be kind as we see the bigger picture and understand how much we can do in the world, and to be brave as we face the greatest adversities in our lives."

Last but not least, before the seniors received their diplomas, Head of School Matt Byrnes spoke to the graduating class. "You kids are good at things, and confident -- but I want to use my final words to the class to give some advice. This is not follow your passion cheerleading. What this is some thinking about how you lay the groundwork to be able to follow your passion. You need to be thinking about a plan -- not how you are going to go from the point A of college to the point B of a career, but what can you do improve the quality and efficacy of that journey. Right now you shouldn’t be thinking so much about what you are going to study -- or what you’ll major in -- but how you are going to make it work, no matter what you choose," Byrnes remarked. He added "Class of 2019, you are strong and ready to rock. You can do it -- but you need a plan. We are always here to help. Don’t be afraid to reach out and ask for it."

Congratulations to the Great Class of 2019 for all of their accomplishments!