Ridgefield Theater Barn's Cuckoo is as big as it’s gonna get, and it is colossal 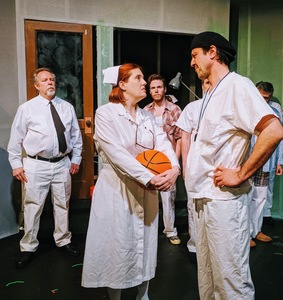 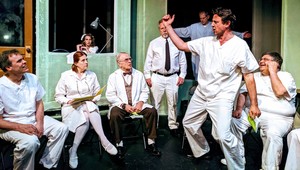 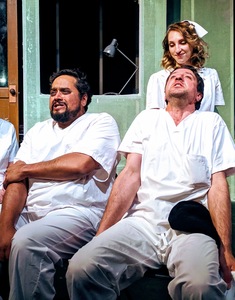 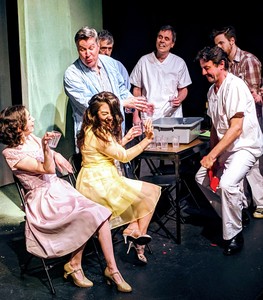 One Flew Over the Cuckoo’s Nest, based on the novel by Ken Kesey and adapted for the stage by Dale Wasserman, closes out Ridgefield Theater Barn’s 53rd season like a thunderstorm--and the lightning is transfixing.

Themes of identity and humanity are set against the stigma of and cruelty toward those with mental illness, and they are still as vivid as when Kevin Sosbe directed this show almost twenty years ago (although the language of the play has soured since 1962). Sosbe and his actors craft this story to tug on our hearts and connect us to this stark world with contemporary compassion and old-fashioned outrage.

The pre-show music consists of bluegrass renditions of rock songs, from Steppenwolf to Green Day to Avicii, alerting us that the world may be a little topsy-turvy for the next few hours. Our first character introduction is to A.M Bhatt’s Chief Bromden shuffling in half house light, and, as society is apt to do with the mentally ill, he is hardly noticed as the audience continues to eat, drink, and talk. This would be a mistake.

RTB’s piece works hard (but not too hard) to sidestep the immense footprints that the 1974 film left on the collective consciousness. The Oscar-winning dynamic of Jack Nicholson’s Randle Patrick McMurphy and Louise Fletcher’s Nurse Ratched is ever-referenced as one of the greatest psychological knock-down, drag-out bouts of 20th century theatrical entertainment, and their performances left an indelible imprint. We enter this production with the ghosts of those characterizations lingering in the ether, and hope for the best.

As McMurphy and Ratched respectively, Fred Rueck and Alicia Dempster set us at ease. They are well-matched in their grit and create a world that may be grim, but possible. Costume designer Brenda D. Renfro has swapped out the iconic wool watch cap for a motorcycle cap (a la Marlon Brando in The Wild One) which wears Rueck more than he wears it; McMurphy is posturing in a tough guy persona that doesn’t quite fit him. Dempster maintains an even-keeled passive aggression, with an emotional sterility akin to her nurse’s uniform. They maneuver with enough swagger to be notable, and still leave space for their fellow actors to animate this lobotomized world.

Rueck, like McMurphy, relaxes as the play progresses, for the relationship between him and his fellow patients is at the crux of this play. (Although technically, Mark Hankla provides the crux of the play, stalwartly portraying the lobotomized Ruckly in a windowsill crucifixion for the majority of the action, and manages to embody such a literal stock character with the mindful stillness of a (foul-mouthed) Shaolin monk.) Standing out is a radiant Timothy Huber as Dale Harding, the current reluctant alpha in the pack, who portrays Harding’s wit and worry with delightful authenticity. Billy Bibbit, the abused, stuttering ingenue of the ward, is navigated by Sam Bass with adroitness, and while he may swing into melodrama at times, his performance invites us to join his traumatic ebbs and flows with heartbreaking ease. I appreciated Tim Trewhella connecting his Martini’s hallucinations to the audience with specificity, dealing us in to the card game so that we are not just spectators but participants in the madness. Stephen Zerilli as Cheswick floats in sweetness and handles the humor and hardship with aplomb. Roger Dykman’s Scanlon has less to do but matches the mood and energy of the group solidly, including in the beautiful baseball game scene.

The most impressive performance was Bhatt’s Chief. Chief is already written with gravitas, and Bhatt’s towering impression transcended the physical (as he clocks in shorter in height than Rueck) and landed in his pure embodiment of the mentally and emotionally afflicted native of the Columbia tribe. Watch his eyes. Watch his arms. Note his atypical Hindu tattoo of peace and power that serves as costume of “other-ness.” Pay attention to the schizophrenic short circuiting of his monologues. Chief is our true protagonist, and Bhatt keeps us rooting for him, even in the play’s tragic climax.

As reality and illusion shift through the institution-green scrims, RTB’s Cuckoo’s Nest urges the audience to ponder ideas of society, sanity, and power, and how we fit into it all.

One Flew Over the Cuckoo’s Nest runs until June 22, 2019 at the Ridgefield Theater Barn, 37 Halpin Ln, Ridgefield, CT, 06877. Cabaret style seating. Doors open one hour prior to curtain, which is 8PM evenings and 2PM matinees, and audiences are invited to bring their own food and drink. Tickets are $35 for adults, and $28 for seniors, students and veterans, and available at ridgefieldtheaterbarn.org or by calling the box office at 203- 431-9850. For more information, email info@RidgefieldTheaterBarn.org. Recommended for mature audiences.