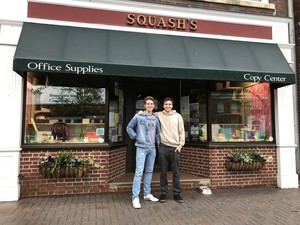 Bill Bellion, who passed away in November of 2018, was a Squash's stable, who always greeted customers with a friendly smile, was willing to go the extra mile to help kids find the perfect school supplies, and had a smile and laugh that was contagious.

"I've wanted to make this film since I was in high school. It's based on my experiences working at Squash's Ridgefield Office Supply and inspired by my former boss," says filmmaker, Nick Freeman. He goes on to say, "The store has remained in the same location for over 60 years and it's iconic to the surrounding town of Ridgefield. I worked here for four unforgettable years and this film is a tribute to my experience and to the store itself."

According to the film's Indiegogo fundraising page, the protagonist in Help Wanted is oppressed by his helicopter boss who has never set foot in the store. He is constantly spied on through the security cameras and micro-managed to the extreme. His life is changed when he meets a strange customer who introduces him to a form of therapy known as ASMR.

Freeman writes on the films Indiegogo fundraising page, "I love films that take something that is ordinary (like a small town office supply store) and make it unexpected. Squash's always seemed to attract the strangest people and events. I remember once a mouse got into the store and we created a maze for it using tri-fold poster board. The customers cheered as my co-worker hopped into the maze and chased it out into the street with a broom. Another time, a strange old lady convinced me that she was the first person ever to fly when she jumped out of a burning building. She had a newspaper clipping to prove it and I wasn't going to say I didn't believe her."