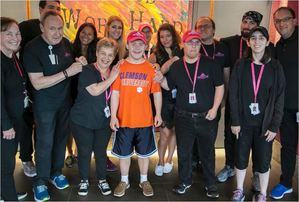 Today, Prospect Kevin completed his last day of employment at The Prospector Theater. Meaningful employment paid off - far beyond the dollars earned.  The Prospector announced on their Facebook Page that Kevin will be continuing his education at Clemson University this fall!

"We are so excited for him," fellow Prospects said.

Kevin's mom shared heartfelt words of appreciation with The Prospector Theater family. "Please extend my gratitude to everyone at the Prospector for welcoming, teadhing, and for being the greatest role models for Kevin. Kevin has learned, and will continue to learn from the valuable lessons during his time at The Prospector."

Kevin plans on continuing his role as a Prospect at the Theater while on college breaks.