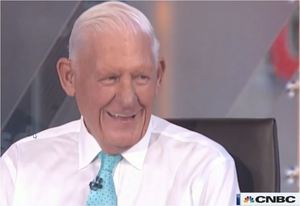 After more than twenty years as a CNBC contributor on Squawk Box, the must-watch "pre-market" show for CEOs, Ridgefield resident Larry Bossidy, the former CEO of Honeywell, announced on the air that today was his last appearance.

“I want to say that as I approach my 81st birthday, it’s time for me to move on. So, this is my swan song.  I want to say thank you for putting up with me for all of these years and I wish you all the best,” said Bossidy.

Co-anchors Joe Kernen, Becky Quick, and Andrew Ross Sorkin appeared stunned and were quick to jump in, berating him, and complimenting his vast business knowledge. Becky Quick said “You are not allowed to leave!"

But, Bossidy threw up his arms and said with a laugh, “I’m done! I’m finished! It’s always time for people to move on and my time has come.”

There is a twitter hashtag campaign to bring him back #GetLarryBack.