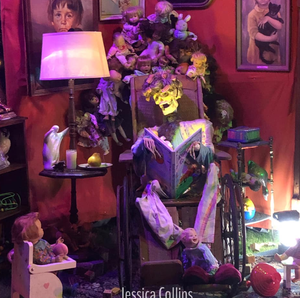 It takes a Halloween display truly extraordinary to demand police presence and close a road - two days after Halloween. But, that's exactly what happened.

Last night, Saturday, November 2, Bill Franzen (aka Mr. Halloween) told neighbor and photog, Jessica Collins, that he estimated more than one thousand descended on New Street for a look at his creation, which is more like a Hollywood set than a Halloween display.

It was Halloween all over again - costumed kids, adults, some with dogs, flocked to New Street for a look at Franzen's Halloween spectacle, which was both nightmarish and genius. Franzen's tricks were accompanied by treats, thanks to New Street homeowners who welcomed trick or treaters (again). I mean, you can't get enough of Halloween in Ridgefield - right?

Thanks to Mr. Franzen for keeping New Street's welcomed nightmare alive and for Ridgefield Police for keeping our residents safe.