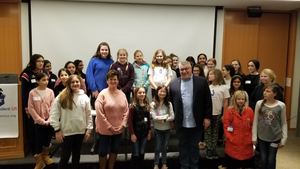 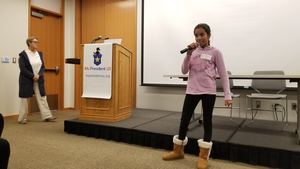 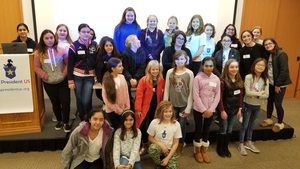 Participants of Ms. President US gathered again at the Ridgefield Library on January 31 to learn even more skills and strategies to become female leaders. Among the speakers at this session was Courtney Lauria, and educator from the Women’s Center of Greater Danbury.

Lauria opened with the different ways media can influence someone and how it can impact the way we feel and what we desire. However, she consistently encouraged the girls to “Have a sense of self and come back to your centered self.” She made the future female leaders aware of what videos can end up on social media using different examples from current day. The girls were reminded to be careful on social media while also embracing who you are and whatever videos you post.

After discussing the effects of media on daily life, participants played a game that tested their desires as well as uncovered new things they might want to work towards. After understanding the media’s impact on their self-esteem, they began to gain new advice for their upcoming election.

Gopika Sheth, last year’s Hamden Ms. President US who ran on a Transportation Access platform, came to speak to the girls about how to go about picking a topic for your campaign. She advised anyone that is running to pick something that you are passionate about since that will make their campaign much better. In addition to last year’s Ms. President US winner, both Cindy Bruno (democrat) and Wayne Floegel (republican) from the Ridgefield Registrar of Voters joined the session to speak with the girls about elections as well as suggestions for the campaigns to come in March.

The girls were informed about the rules for voting, how/when elections take place and the voting rules in different states. Cindy Bruno and Wayne Floegel then went on to tell the girls the extent to which candidates campaign and encouraged them to do the same on March 29th, the Ms. President US election day at the Ridgefield Playhouse.

Courtney Lauria closed the session with a reminder about having confidence in yourself even when there are conflicting voices in your head by saying “Just because you have bad moments, it does not define you, envision yourself succeeding, know you have the ability to improve, and practice failure.”

Ms President US, Inc. is dedicated to motivating and preparing girls to aim for the highest civic leadership positions.  For questions or more information, please contact This email address is being protected from spambots. You need JavaScript enabled to view it. .