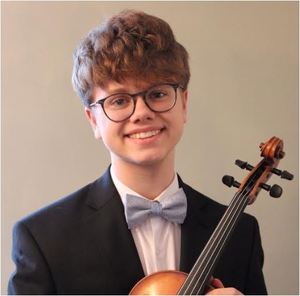 As the winner of this annual competition, Coleman will be performing the first movement of Viola Concerto in G Minor by Cecil Forsyth with the WCYO Symphony Orchestra as the featured soloist this Sunday, February 23, 2020 at 4:00 PM at the Clune Center for the Arts in Wilton.

“Coleman's dedication to music and the WCYO is exemplary. His natural talent and musicianship shines in the Forsyth Concerto and I'm so glad to be performing it with him," said Eric Mahl, WCYO Music Director and conductor of the Symphony Orchestra. And his peers in the Symphony Orchestra agree based on the dynamic applause he has received at every rehearsal.

Coleman has been a member of the WCYO for the past four years. After moving from Pittsburgh, he started playing viola in the fourth grade, simply because the orchestra was short on violists. He continued playing at East Ridge Middle School in Symphonic Orchestra and Chamber Orchestra under the direction of Shane Peters and began his studies with Katherine Dorn Lewis, his current private instructor.

Coleman currently participates in numerous music ensembles under the direction of Michael McNamara at Ridgefield High School including Concert Orchestra, Symphonic Orchestra and the after-school clubs, Rockestra and Chamber Orchestra. He serves on the Student Leadership Committee for the RHS Music Department and for the WCYO as a student advocate.

Coleman has participated in local and state level orchestras: the 2018 Fairfield County Orchestra, 2019 Western Connecticut Regional Orchestra, 2019 All State Orchestra and the 2020 Western Connecticut Regional Orchestra. In 2019, Coleman performed in a chamber quartet at Skidmore College, with masterclasses and support from The American String Quartet. He has also participated in chamber performances through the WCYO. In 2019, Coleman played the viola in the pit for the RHS production of The Addams Family, and will again be playing in the pit for the RHS production of Legally Blonde this spring.

Sunday’s concert will also feature the WCYO Wind Ensemble, conducted by Albert Montecalvo, and the WCYO String Ensemble, conducted by Sasha Ono. The repertoire includes both contemporary and traditional orchestra and concert music highlighted by the Symphony Orchestra’s performance of Tod un Verkarung, Op. 24 by Richard Strauss, an engaging and romantic piece that “clearly and captivatingly takes an audience on a journey that encapsulates the totality of human emotion” shared Maestro Mahl.

Tickets are $20 for adults and $10 for students and seniors, and available at the door.

The WCYO is based in Ridgefield, CT and provides talented young musicians (grades 5-12) in the regional Connecticut and New York areas with exceptional learning and performance opportunities, while fostering an awareness and appreciation of the enjoyment and power of music. To learn more, please visit the WCYO website at wctyo.org.