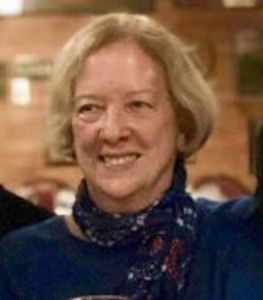 With the resignation of Sharon Dunphy on March 1, Sara Champion has been elected president of the Ridgefield Historical Society by the unanimous vote of its board. Ms. Dunphy has assumed the role of first vice president.

“These are challenging times for us all,” said Ms. Champion, “and our mission to preserve Ridgefield’s history is no less important. For example, right now, in addition to virtual programming, we are collecting material about how our town is reacting to this historic pandemic and researching how past outbreaks have affected our town.”

Interested in history and genealogy, Ms. Champion is a former corporate attorney, a graduate of Duke University and the New York Law School, who specialized in executive compensation. Before her law career, she worked as a Russian linguist for the National Security Agency and taught Russian at the Defense Language Institute in Monterey, Calif. She earned an M.A. in Russian at the University of California at Davis and continued to work for the U.S. Government in San Francisco and New York City. She moved to Ridgefield in 2004 and retired in 2012. She remains licensed to practice in New York and Connecticut.

Ms. Champion has been a board member of the Society of Mayflower Descendants in the State of New York for more than 20 years and is a new board member of the Connecticut Mayflower Descendants. She is a trustee of the Connecticut Historical Society and a member of its Collections Steering Committee, serves on the Council of the New England Historic Genealogical Society, and is the Registrar and most recent ex-Regent of the Drum Hill Chapter of the National Society Daughters of the American Revolution and chair of the By-Laws Committee for the Connecticut DAR. She is a Founding Director and Registrar of the Society of the First Families of New York.

In Ridgefield, in addition to her work with the Historical Society, she is a director and vice president of the Keeler Tavern Museum and History Center and a member of the town Graveyard Restoration Committee.