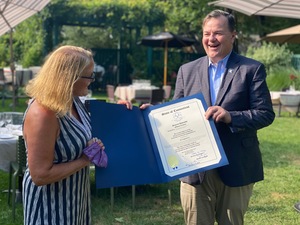 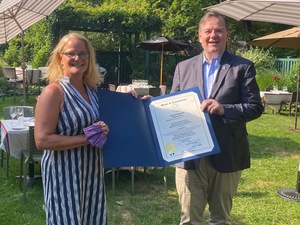 Twenty years in business and an award deeming her Most Influential in the culinary world, that’s how March 2020 started for Sarah Bouissou, the owner of Bernard’s and Sarah’s Wine Bar.

And, just after Bouissou accepted her award at CTBite’s first annual “It’s a Woman’s World” event and Bernard’s began a series of dinners to commemorate two decades in business, a pandemic rocked our country and world, halting celebratory gatherings and shutting down businesses.

Although Bouissou didn’t know it, on March 2, State Representative John Frey together with Senator Will Haskell introduced an official citation from the State of Connecticut recognizing her for being named one of five extraordinary women in Connecticut's culinary world.

Today, just as Bousissou was preparing for the restaurant’s annual Bastille Day celebration, a day that happens to mark Bernard and Sarah’s 30 wedding anniversary, Frey met Sarah in the restaurant’s beautiful garden and presented her with the congratulatory citation from the State of Connecticut that reads in part:

Be it hereby known to all that The Connecticut General Assembly hereby offers its sincerest congratulations to Sarah Bouissou in recognition of being named one of the most influential women in the Connecticut Culinary Industry. We have a great deal of respect for young women and others aspiring to follow in your path. You should be proud of business-owning Ridgefield landmarks Bernard’s and Sarah’s Wine Bar

You might not know this, but Sarah started as the first female chef at New York City’s legendary Le Cirque restaurant. It was here that she first set eyes on Bernard Bouissou! The rest is part of Ridgefield's history.

From all of us at HamletHub, congratulations to Sarah Bouissou, a female pioneer in the culinary industry and happy anniversary to a couple who, twenty years ago, opened a French restaurant and brought fine dining to new heights in our New England town. We love you and thank you for all you do for our community - it's residents and nonprofits!