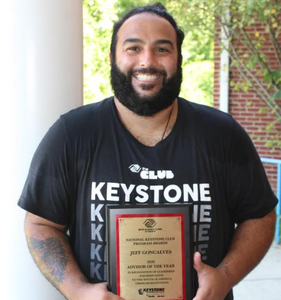 “Over the past decade, the Club has established one of the most recognized teen programs in the country, and Jeff has built upon that, developing them into the dynamic programs they are today. He continues to bring our leadership programs and the Club to new levels. We are grateful every day for the hard work and dedication he puts into making the Club the special place it is and we are thrilled he is receiving the recognition he deserves,” explained Mike Flynn, Chief Executive Officer at the Club. “He is an amazing mentor to thousands of Club kids, and we are lucky to have him in Ridgefield”

Jeff and Keystone member, Hailey Robson, were selected to serve on the 2020 National Keystone Conference Steering Committee back in December. As a part of the Committee, they traveled to Boys & Girls Club of America’s headquarters in Atlanta, Georgia for a planning weekend with 10 other Keystone members and their Advisors from Boys & Girls Clubs across the country, in addition to participating in monthly conference calls and completing assignments leading up to the Conference. The conference was set to take place in Washington, DC, but was moved to a Virtual Conference that took place last month.

“Jeff, Hailey, and the entire steering committee persevered through a challenging situation and pulled together an amazing conference that connected over 2,500 teens and their advisors from Boys & Girls Clubs all across the country, and even overseas!  We are so proud of both of them and could not ask for better representation of our Club,” said Kristin Goncalves, Associate Executive Director at the Club.

Furthermore, at the National Virtual Keystone Conference, Boys & Girls Clubs of America awarded seven programmatic awards to Keystone Clubs who are doing notable work in their Club and community. At this

For more information on the Ridgefield Tigers Keystone Club, please contact Jeff Goncalves at This email address is being protected from spambots. You need JavaScript enabled to view it. or 203-438-8821 ext.19.

Each day at the Club we provide youth development programming in five core areas: Sports, Fitness & Recreation, the Arts, Education & Career Preparation, Health & Life Skills, and Character & Leadership Development. Members of the Club participate in activities in our five core areas that encourage increased learning, improved fitness, positive decision-making, creativity, leadership, and community service. As part of the National Boys & Girls Club movement, we are able to utilize high quality programs grounded in years of research. Programming activities are scheduled each day and are free to all Club members.