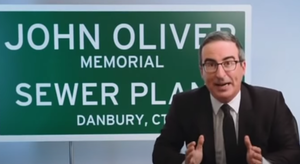 Your move Danbury! I want my sewage plant!

Mayor Mark Tweet this morning @MayorMark, "Yeah. We are on it @iamjohnoliver - standby...

Last night, on his Sunday broadcast on HBO’s Last Week Tonight with John Oliver, the comedian shot back at Danbury in response to Mayor Mark retaliation via a bold announcement that the City sewer plant was renamed John Oliver Memorial Sewer Plant.

Oliver revealed that he really wants that to happen. No. REALLY. So much so that he says he will donate $55,000 to Danbury charities Connecticut Food Bank, DonorsChoose Danbury Teachers, and the ALS Association Connecticut Chapter IF he gets his namesake sewer plant.

Mayor Mark Boughton has just one week to respond to this charitable proposal, or Oliver says he will give the money to nonprofits in neighboring towns.

You might say, Oliver has a new found love (and most definitely respect) for the Hat City, now calling it an “incredible place”.

He began his ten-plus minute focus on Danbury by saying,  “Quick update, I’ve taken a few cheap shots at the City of Danbury over the last few weeks and the people have taken notice.”

And Oliver is all about it.

“I did think the people of Danbury would take issue with what I’ve been saying. What I didn’t expect was just how great their response would be. Danbury has risen up and fought back magnificently,” he said.

Magnificence comes by way of a young City-dweller and Danbury’s pro hockey team.

“Take this surprisingly well-produced response from a child who lives there.” With that, Oliver aired the hysterically funny (and awesome) response from Caio, a young Danbury resident and host of Caio Ninja News, a kids news/comedy program. “According to my mom…” the eight-year-old begins…watch this 8-year-old superstar HERE. Oliver says, “Wow, that kid came in hot and that is all good!”

Oliver continued,” That boy wasn’t Danbury's only defender, there was this official response from Danbury Hat Tricks, their local pro hockey team.” Director of Communications for the Tricks, Casey Bryant defends the City and mocks Oliver, pointing out  his ionic role of “Dick Pants” in the Love Guru. Watch it HERE.

Oliver saves the best for last.

“The strongest response by far came from the Mayor of Danbury himself. A sewer plant? “I didn’t know that I wanted my name on your [explictive] factory, but now that you mention it, it’s all that I want!”

Oliver said as he finished his show as was leaving the set, “Don’t Danbury this one up!”