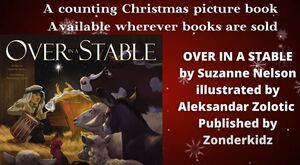 Kids are invited to sing along with Ridgefield singer/songwriter George Brennan as he puts the counting Christmas picture book, OVER IN A STABLE, to music! OVER IN A STABLE is written by Ridgefield resident Suzanne Nelson, illustrated by Aleksandar Zolotic, published by Zonderkidz, and is available everywhere books are sold.

Brennan says that Nelson, who just released a brand new children’s Christmas book entitled “Over In A Stable” approached him about a month ago with an idea of turning her written words into an acoustic sing-a-long. “It is set to the cadence of “Over in the Meadow” so kids can sing along to her written words,” says Brennan.

Nelson is a popular elementary and middle school Scholastic Books author who has for years launched a long series of beloved children’s books including “Donut Go Breaking My Heart”, “Pumpkin Spice Up Your Life”, “Hot Cocoa Hearts”, and this past April, her book “You’re Bacon Me Crazy” premiered as a Hallmark Television movie.

Suzanne Nelson’s “Over In The Stable” can be ordered anywhere books are sold or directly from her website.